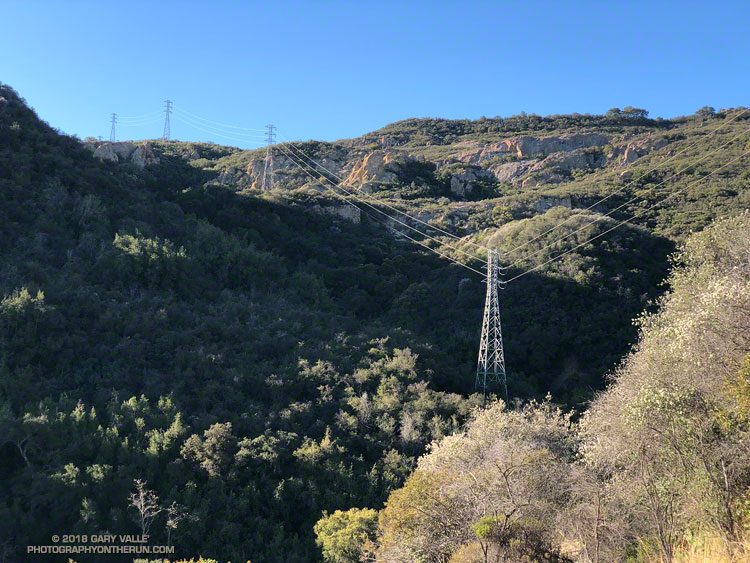 The rock and brush-choked gully was going to have to do. There was no “use trail” or other path that I could find. Just to be sure I wasn’t missing another route, I followed the overgrown dirt road past the power transmission tower to where it dead-ended at a wall of chaparral.

Returning to the gully, I looked up. A large boulder and some other debris were wedged against a tree, blocking its entrance. Knowing well the pitfalls, I carefully clambered over the aggregation and started up the congested channel.

Curiosity is an irresistible force for most that love the outdoors. It propels us to explore near and far, experiencing what we have not experienced before. It knows no geographic bounds, and can be equally strong a mile, or a hemisphere, from home.

In a sense this adventure began years ago, when I first noticed the power line service roads paralleling the Bulldog Mtwy fire road. Since then I’ve done the Bulldog loop many times. Each time I’ve looked over at those roads and wondered why they didn’t connect — and how difficult it would be to link the two.

That question might finally be answered today. The plan was to do a variation of the Bulldog Loop, finishing the climb to the crest using the power line service roads, rather than Bulldog Mtwy.

When I’d parked at the the Cistern trailhead on Mulholland the temperature had been a chilly 28 degF. A mile and a half into the run, down in the canyon along Malibu Creek, the Tempe sensor attached to my pack read 24 degF!

It was cold enough that the wind chill from running 4-5 mph was significant. I could feel the cold through my gloves and arm sleeves and my hands were getting cold. I flexed my hands as I ran, and from time to time would briefly walk to reduce the chill. Relief was only a couple of miles away — at the start of the Bulldog climb I would break into the sun.

Ah sun, glorious sun! There is nothing quite like the warmth of the morning sun following a cold dawn. It warms the body and imbibes the soul. It is something to relish and celebrate.

I’d reached that sun about 30 minutes ago. Now I was immersed in cool shade and working my way up the steep drainage through thick chaparral. The puzzle was not an easy one, and I’d almost turned around several times. To not make a foolish decision, it is necessary to be willing to turn around.

At one point the route up the gully appeared to be blocked. Looking for an alternative, I worked up a steep slope on the left, concentrating on the route-finding. It wasn’t going to go either. When I stopped to re-evaluate the route, I realized I was surrounded by a tangled thicket of just-sprouted poison oak.

Resigned that it was just going to be too ugly to continue, I returned to the gully, intending to follow it down. But then I muttered to myself, “I wonder…” and took a couple steps up the gully, and then a couple more. A route through the impasse revealed itself. Many times that’s all it takes — a step or two — to see a solution not seen before. I could continue.

Eventually the terrain forced me to the right of the gully, up along a sandstone rib, and toward a little outcrop. The rock quality was very poor. Fist-sized pieces of cobble embedded in the sandstone could be pulled out by hand and sound-appearing holds were easily broken.

With some careful route-finding I was soon on top of the sunlit rock. An island in a tumultuous ocean of chaparral, it gave me the first good view of my surroundings since I’d started up the gully. From the outcrop I could see why the roads didn’t connect. Partially hidden from view, a 50′ tall headwall completely blocked the drainage.

There was no way I was going to try and climb the headwall directly. Trying to force a line here would be a very bad idea. But there was a weakness on its right side that — if it wasn’t too steep and loose — might go.

And it did! Once on top of the headwall, only a bit of bush-whacking was necessary to get to the first tower on the upper service road. Freed from the tangle of chaparral, it didn’t take long to get up to Castro Peak Mtwy, and back onto the Bulldog loop.

I won’t be doing THAT route again, but did enjoy solving the puzzle — even if it was a bit bizarre. Here are a few photos taken along the way.