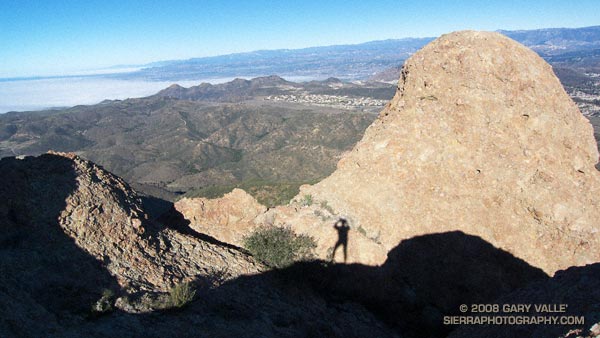 These two routes can be combined into an adventurous loop that starts and ends at the junction of Danielson Road and the Old Boney Trail. The loop, with no side trips, works out to about 4 miles. Add in the 2.5 mile approach from the Wendy Drive trailhead, and the total distance for the course is about 9 miles, with an elevation gain of a bit over 2000 ft.

I did the loop counterclockwise — up the western ridge and then down the eastern. The New Year’s weather could not have been better. Dense fog clung to the coast, but a brisk offshore breeze kept inland views crystal-clear. On the way up the western ridge I couldn’t resist doing a short detour to climb one of the crag’s appealing summits.

At the top of the western ridge, I briefly debated doing Tri-Peaks and Big Dome, but was hoping to make it home by noon, so skipped those side trips.

With gravity on my side, the run down the eastern ridge was not nearly as gnarly as I thought it might be. I was running in Inov-8 Roclite 305s — nimble shoes with a fell running heritage. Mine weigh only 21.1 oz./pair (US 9.0) and were particularly well-suited to the rough terrain.

This climb and adventure run was a great way to start the New Year — and I did make it home in time for lunch with my wife!

Here’s a Google Earth image of a GPS trace of my route.