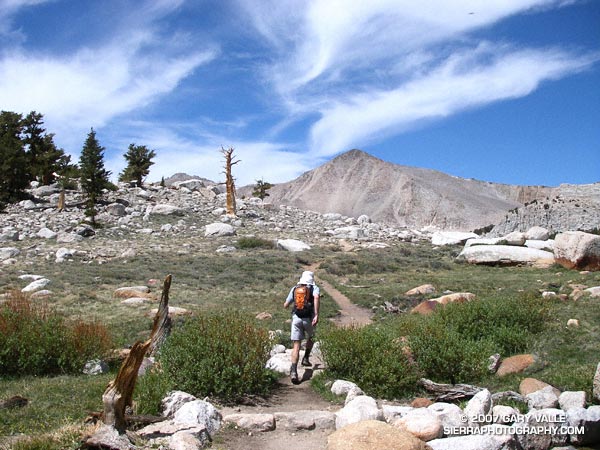 The sky was brightening in the east, and sunrise was approaching when I met Miklos and Krisztina at the Denny’s in Sylmar. We were already wasting light. The plan was to drive from near sea level up to Horseshoe Meadows, at about 10,000′ on the Sierra east side. The hike/run we had in mind was a keyhole loop from the Cottonwood Lakes Trailhead up (old) Army Pass and then down New Army Pass. If we felt OK at the top of Army Pass, we would also do Mt. Langley (14,026′).

The weather forecast looked good. There was a chance of some gusty southwest winds in the afternoon, but temps were warm and there was virtually no chance of T-storms. With a record low Southern Sierra snowpack, there was almost no chance that an ice axe would be required on Army Pass. I was familiar with the route on Langley and down from New Army Pass, and expected to be back to the car well before sunset. But, just in case, the moon was about half full.

In fact, there had been very little snow on Army Pass, or anywhere else. We reached the pass relatively quickly, and decided to continue to Langley. Now, after another hour of hiking, we were above a prominent rock band that extends across Langley’s south face, and making good progress.

I’ve been convinced for some time that pursed-lip breathing helps me at higher altitudes, particularly when I’m not well acclimated. There’s a skill to it. There seems to me an optimum blend of heart rate, respiratory rate, and the amount of resistance created on exhalation. When all these factors are in balance, the breathing technique is almost automatic and effortless, and it really does seem to help. It certainly seemed to be helping me now.

I topped out a few hundred yards west of the summit, and ambled over to the high point of the peak. On a scale of 1 to 10, I felt pretty good — maybe a 7. Making an effort to stay hydrated, consume plenty of calories, and not push the pace too hard seemed to have worked — at least this time.

The view along the crest to Mt. Whitney and the peaks of the Kings-Kern Divide was telling. It was remarkable just how little snow there was at the highest elevations of the Sierra. A week before I had been paddling the Kern River. Now I could see why the flow on the upper Kern was dropping so fast.

This wide-angle photograph of Mt. Whitney and the Sierra crest from the summit of Mt. Langley is from a high resolution composite of 8 individual images. It was created using the improved photo-merge tools in Photoshop CS3. 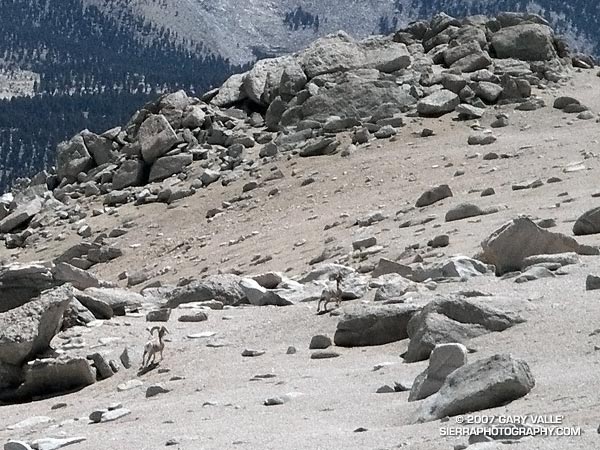 Miklos and Krisztina joined me on the summit, and after taking a few summit photos, we headed down. Screeing down the slopes below the rock band, we were startled when a herd of perhaps 20 big horn sheep rumbled across the slopes below us. They flowed across the rough landscape like quicksilver. Graceful and robust, they moved effortlessly between the rocks and up a small slope. In the moments it took me to react, grab my camera, and turn it on, all but two large rams trailing the group, had disappeared.

Energized by the sight of these fleet-footed animals, we continued down to the saddle at Army Pass, and then up and over New Army Pass. Before sunset we would be back to the car, and before dark, eating dinner at Lone Pine. Before midnight we would be back in L.A. Here’s a Google Earth image and Google Earth KMZ file of a GPS trace of our route.

Note: Going to higher altitudes without properly acclimating can result in very serious, life-threatening illnesses. There is much information available on the Internet regarding altitude sickness and acclimatization. As a starting point see International Society for Mountain Medicine: An Altitude Tutorial and Wikipedia: Altitude sickness.