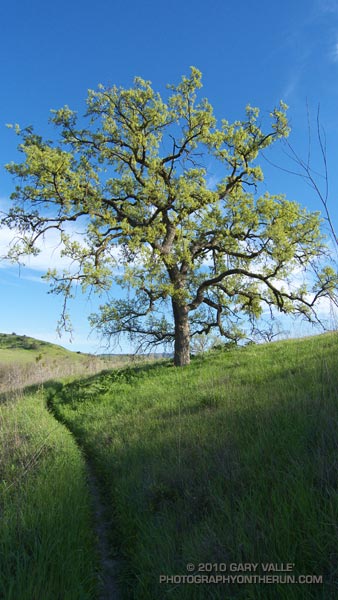 Even if the calendar is a little slow, Spring is here. The oaks are leafing out, goldfields blooming, chorus frogs  singing, and I just had my first rattlesnake encounter of the year.

The single track trail paralleled the dirt road in upper Las Virgenes Canyon. I weaved and wound my way through the grassland and oaks, eventually returning to the road near the connector to Cheeseboro Canyon.

Usually, the sound of my footfalls would be enough to abruptly silence the sing-song of the frogs at the creek crossing. As I approached the creek, the calls slowed but did not stop. I paused at a small pool and stood quietly.

Over a period of seconds, the chorus of the frogs grew to a surprising intensity, interleaving and reverberating in such a way as to envelop me in sound. In the small pond at my feet, I could not see the frogs, but I could see the waves and ripples of their calls on the water’s surface. Immersed in sound, I stood still for a few moments, and then crossed the creek, and continued down the canyon.

I’d been thinking about it earlier in the run. Highs had been in the 80’s since Monday. Was three days enough to get the rattlesnakes out and about?

I reacted to the rattle before I heard it, leaping away from the sound. The snake was in the grass at the margin of the trail, about halfway up “the Beast,” west of Lasky Mesa. It was nearly invisible in the tall grass, and only an inch or two off the overgrown path. Fortunately, it’s reaction had been similar to mine, a defensive recoil, rather than a strike.

The adrenalin of the encounter quickened my pace up the hill. At the top of a hill, a falcon flew from a sentinel oak. I followed its flight until it disappeared in the glare of the setting sun, and sighed…