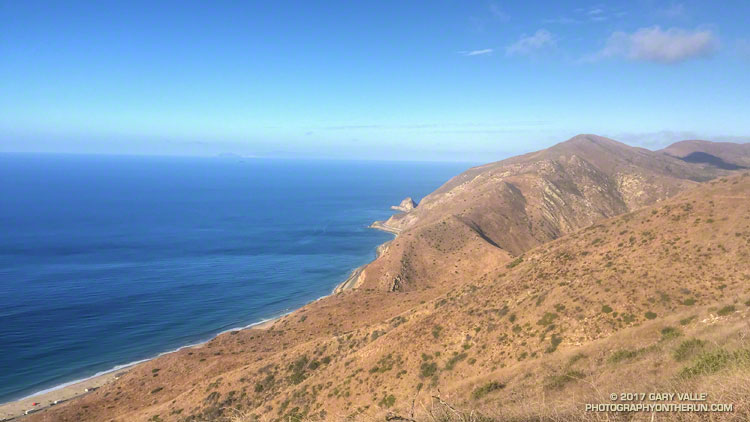 There’s magic in the morning, when the owls hoot softly and there is a chill in the air.

I’d started my run from the Wendy Dr. trailhead when there was just enough light to see the trail. The moon was poised low in the western sky, full and bright. As I passed the frame of the Chumash ‘Ap at the Satwiwa Native American Indian Culture Center I’d thought about the Chumash, and how well they must have known this land. It is one thing to visit a place, and quite another to live there.

Today the plan had been to run to the Ray Miller Trailhead and do a little of the Ray Miller 50K course along the way. At the start of the run I hadn’t decided which route I was going to take to Ray Miller — Hell Hill or Fireline. I’d finally opted for Fireline, since that route would follow the last 5 miles of the 50M/50K course and is much more runnable.

I hadn’t run Fireline since the 2013 Ray Miller 50K. With only 7 miles on my legs (instead of 26) it didn’t seem nearly as steep. Once at the top of Fireline, and after doing a bit more uphill on Overlook fire road, I eventually got to the best part of today’s run — the 2.5 miles of scenic downhill on the Backbone Trail to the Ray Miller trailhead on PCH.

The Pacific was painted in a palette of wide-gamut blues and although it was hazy offshore, there were excellent views along the coast. To the west Anacapa and Santa Cruz Islands could just be seen in the ocean haze and Mugu Peak loomed golden in the morning sun. The Ray Miller Trail is very popular and on the way down I passed several runners in the first miles of their morning run.

At the Ray Miller parking lot my Garmin fenix read 12 miles. Just like climbing a mountain, getting to the turnaround point of a long self-supported run is only part of the adventure. I gulped down some water at the water fountain; checked how much water I had left in my pack; ate a Snickers left over from Halloween; and then started the 1000′ climb back up the Ray Miller Trail to the Overlook fire road.

The run was going well and at the start of the climb I was thinking about following the 50M/50K course up and around Mugu Peak before starting the trek back to Wendy Drive. By the time I’d reached the top of Ray Miller and had climbed up to the high point of Overlook fire road my mileage appetite wasn’t so big. Following a short side trip into La Jolla Valley, I returned to the Overlook fire road, descended Hell Hill and Wood Canyon, and started working my way back up Sycamore Canyon on the Two Foxes Trail.

At the Danielson Multi-use area there was a large group participating in a guided hike. A familiar runner with a distinctive hat was making his way around the group. It was photographer and ultrarunner Larry Gassan. Larry joined me for the remainder of the run and his stories made the run back up Sycamore Canyon and Upper Sycamore much more interesting.