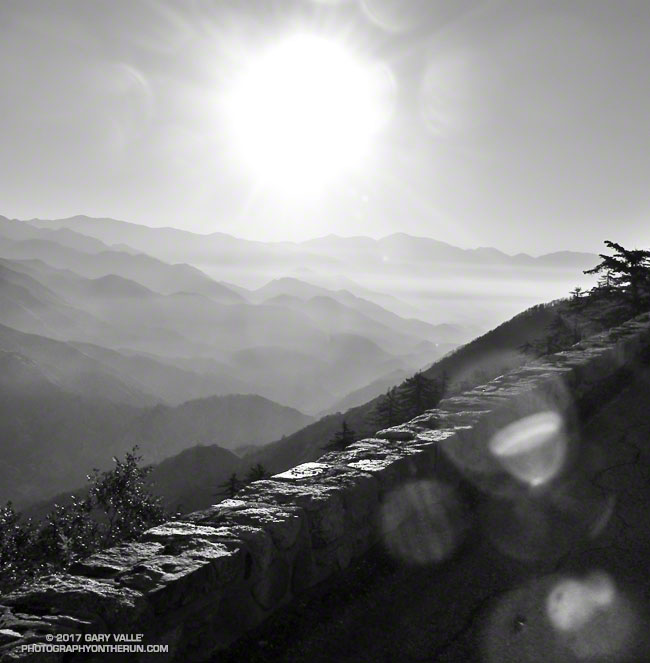 The heat was oppressive. The air was sweltering and still, reminding me of hot nights in the South, when heat lightning flashed on the horizon, and any movement was an effort. An adductor muscle in my left leg started to cramp and I jumped up from the reclining chair. Heat, and more heat had been the theme of this day. I had returned home from running my eleventh, and hottest, Mt. Disappointment 50K, only to be caught in a widespread power failure caused by a transformer explosion and fire in a Northridge distribution station.

How hot was it for the 2017 Mt. Disappointment races on Mt. Wilson?

Even more remarkable than the weather were the performances of the top runners. Ruperto Romero was the overall winner of the 50K with an astounding time of 4:38:44. This was only a couple of minutes slower than his winning 2015 time — when temps were 20-30 degrees cooler. In what must have been an exciting finish in the Women’s division, Elizabeth Ochoa cranked out a 6:19:45, just edging out Ana Guijarro by eight seconds. Victor Martinez won the 25K in 2:08:01, with Jay Nadeau taking the top women’s time in 3:05:13. All the Mt. Disappointment results are available on UltraSignup.

The heat continued to build past noon, peaking between 1:30 p.m. and 4:30 p.m. This made for a long day for those of us in the back of the pack. At 1:00 p.m Red Box Road was a blast furnace, facing directly into the sun. I was very glad to have scouted the final seven miles of the course last weekend. The creeks crossing the road really helped to keep from becoming over-heated. Strayns Creek on the Kenyon Devore climb also helped me to cool down.