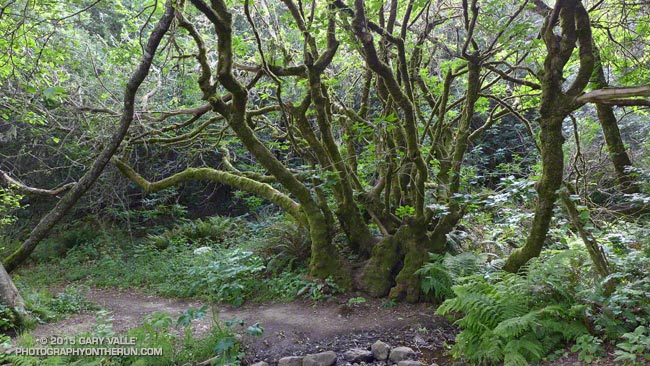 The sign read “Middle Green Gulch Trail” but didn’t indicate if the trail went to Muir Beach. I was on the Coyote Ridge Trail and about 12 miles into a running adventure that had started in the Marina District of San Francisco, crossed the Golden Gate Bridge, and then entered the runner’s Wonderland of the Marin Headlands.

My destination was the Bootjack parking area in Mt. Tamalpais State Park. There are many ways to run to Bootjack from San Francisco, but the game I had decided to play was to pick up the Miwok 100K course at the juncture of the Coastal and SCA Trails and run the course in reverse to Pan Toll. From Pan Toll Bootjack was just a few minutes away.

It had gone well so far. The bridge and bay had been spectacular in the broken clouds and early morning light. There had been a bit of a headwind running along Crissy Field, but once across the bridge the wind and temperature had moderated and the weather had become nearly ideal for trail running.

The Coastal, SCA and Alta Trails had been well-signed, so it had been straightforward to get to the the Alta-Bobcat Trail junction. This nefarious juncture is marked with a skull and crossbones on the Miwok 100K map. Here I’d briefly tried to follow the Miwok course in reverse, but bailed and used the more obvious Bobcat Trail to get to the Marincello Trail. Back on route, it had been an enjoyable mile and a half descent to Tennessee Valley.

After chugging up the Miwok Trail from Tennessee Valley, I’d stopped at an unmarked trail and was trying to determine if the single-track was the “Miwok Connector.” I’d only been pondering the question for a minute when some runners happened by and confirmed that it was.

That had been about 20 minutes ago. Now I was trying to get down to Muir Beach and still trying to do the Miwok course in reverse. In my somewhat hastily created cheat-sheet the trail I needed to descend was labeled the “? Trail” which wasn’t a big help. It became one of those, “I’ll just run down to that next corner, where I can get a better view” kind of descents. Corner followed corner, and I soon found myself most of the way down the trail and still up-canyon from Muir Beach.

What was worrisome was that there was a farm in the canyon and it looked like I would have to run through the farm to get to Muir Beach. The trail had to go to a trailhead somewhere. Hopefully somewhere without snarling dogs and shotguns.

I needn’t have worried, I was on the correct route. The farm was Green Gulch Farm Zen Center, a Buddhist practice center. The forest service-style trail sign on the farm’s gate, and some fresh mountain bike tracks, suggested it was OK to pass through, and I was soon on my way to Muir Beach.

At Muir Beach I wandered around a bit and happened on a Western States 100 runner who gave me directions to the Redwood Creek Trail and also where I could get some water if I needed it. The Redwood Creek Trail was lush, green, and somewhat overgrown, but easy to follow. The stinging nettle mixed in with poison oak ensured that I would pay attention to the plants along the trail.

The Redwood Creek Trail ends at Muir Woods Road near the bottom of the Deer Park Fire Road. The fire road (and Dipsea Trail) border Muir Woods National Monument and cross through the northwest corner of the monument near the top of the climb to Pan Toll. Whether going up or down, or on or off the Dipsea Trail, it is outstanding running through a classic redwood forest.

At Pan Toll I crossed the Panoramic Hwy, picked up the Matt Davis Trail and was soon sitting in the sun at the Bootjack parking area.