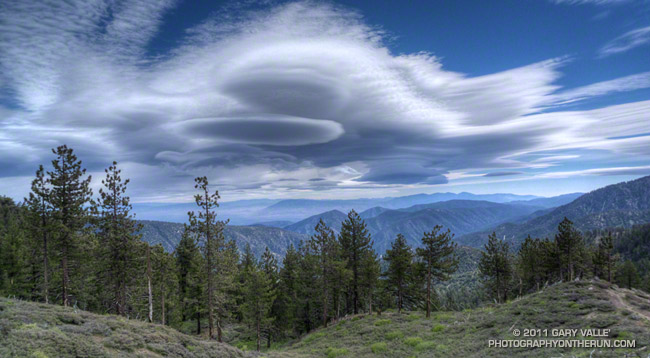 These unusual clouds are a complex of lenticular clouds to the north-northeast of Mt. Pinos, photographed this morning from near Mt. Abel. They were produced by strong south-southwesterly winds blowing across the east-west oriented Emigdio and Tehachapi mountain ranges, north of Los Angeles. Here’s another view of these clouds from near the summit of Mt. Pinos. 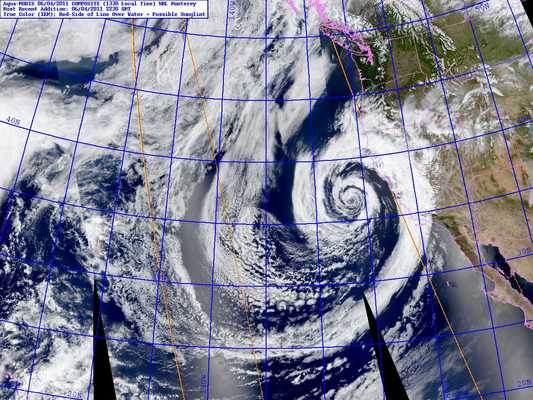 The winds were associated with the circulation of an unseasonably strong low pressure system off the California coast. The storm system has resulted in measurable rain as far south as Santa Barbara County, and new rainfall records for the date were set in San Francisco, Paso Robles and Santa Maria.

The photographs were taken during a blustery out and back trail run from Mt. Pinos to Mt. Abel on the Vincent Tumamait Trail in the Chumash Wilderness. At the start of the run, the temperature at the Chula Vista trailhead (8400′) on Mt. Pinos was a chilly 39°F. In exposed areas the wind speed was 20-25 mph with gusts to around 50 mph.

Other than the potential for deadfall, the wind wasn’t too bad in the trees. The Vincent Tumamait Trail was in the best condition I’ve seen in years.

Update June 6, 2011. The low that was off the Central California coast Saturday and most of Sunday and an associated cold front set a new rainfall record for June 5 at Santa Barbara Airport, and produced a few sprinkles and showers in the Los Angeles area.