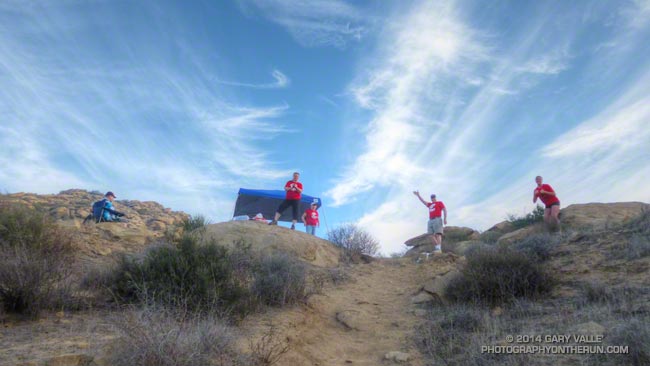 As I worked up the hill toward “Fossil Point” I drank the last mouthful of water from my bottle. I wasn’t surprised that I had run out. The morning temperature had been the warmest in the six year history of the event, and the midday temp in the sun felt like it was in the mid-80’s — maybe higher.

In Southern California it has been the kind of Winter that those in northern climes can only dream about: Day after day with fair skies and the temperature in the 70’s and 80’s. Great for trail running, but with the trade-off that we had had the least amount of rain in over a century.

Chugging up the steep hill I thought about how the run had gone so far. Even if it was a little warm, it was still a pretty good day for a trail run! I hadn’t tried to push the pace on the initial steep climb from Corriganville, and had (mostly) resisted the temptation to pound down the Chumash Trail. The crazy-steep section of Hot Dog Hill on the out and back section of the course felt just as steep and insane as it did last year and the downhill to the Open Space aid station just as pleasant.

It was awe-inspiring to see the faster runners as they returned from Tapo Canyon. As I started the descent into Chivo Canyon Jay Bonthius, the eventual winner of the 50K, had flashed past. The youngest runner in the race, the 19 year old went on to finish his first 50K in 4:05:52 — setting a new course record. His average pace was a remarkable 7:55 min/mile! He ran up the hills faster than many of us ran down them!

I was very happy to get to the top of the climb at Fossil Point. Although it wasn’t the end of the running, or the hills, it was a key point in the 50K. It marked the end of a grueling 5 mile climb from the Las Llajas aid station — the last major climb on the course. It also had water.

I had carried two bottles and that was still not quite enough. There is only so much time during a race available for hydration, and I had made the mistake of not drinking water early, BEFORE I was thirsty. At this point I was dehydrated and that could not be completely remedied until sometime after I crossed the finish line.

Another four miles would find me at the top of the Corridor Trail, which on tired legs might as well be the edge of the earth. This steep one mile descent is the most technical on the course and as challenging as any of the hills. I am always happy to get to the bottom. From here the finish is a little more than a half-mile away and I smiled as I heard the cheers as another runner crossed the finish line.

More than 500 runners participated in the 6th edition of the Bandit Trail Runs, competing at distances that ranged from 6K up to 50K. Many thanks to Bandit Race Committee – RD Randy Shoemaker, Sarita Shoemaker, Eric Cartier, Tommi Diaz, Mat Diaz and Josh Lewis. Each year they find a way to make an outstanding event even better!

Once again the aid station volunteers were phenomenal! Thank you Nancy Shura-Dervin and the Ultraladies, the Encino Trail Heads, Sue Apostolof, Diane Treptows, and all the volunteers! There was not an aid station where I wasn’t greeted with a smile and all the help I needed. Also many thanks to those that worked registration, parking, the finish line, timing, finish line food, photography, safety, communications, and all the other work needed to put on an event like the Bandit.

Reflecting the dedication and character of its organizers, each year the Bandit gives back by supporting an important cause. Last year Bandit raised funds for a local high school running program. This year Bandit is rallying behind runner Alison Chavez in her battle against cancer.

Here is a slideshow with a few images from this year’s 50K.