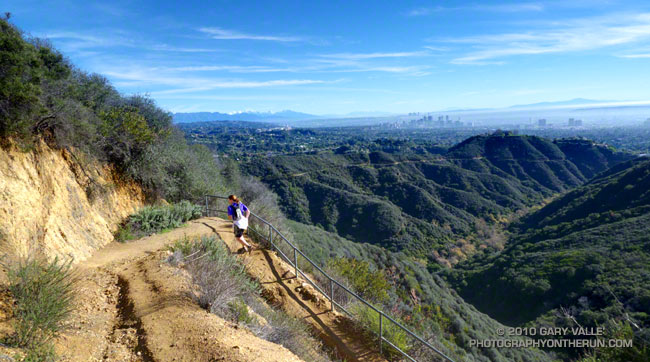 As much rain as we’ve had in Southern California, we’ve still seen some stunning December days with blue skies, pleasant temperatures, and sensational trail running.

Today I was running with Frank and Lynn. They’re visiting from the Pacific Northwest, where the amount of rain has been more or less normal, and spending Christmas in Southern California, where — you know — we’ve had the wettest December in 121 years.

More rain was forecast for late Christmas Day, but today we were between storms. To celebrate the wonderful Christmas Eve weather we did the 21 mile Will Rogers – Temescal loop from Marvin Braude Mulholland Gateway Park in the San Fernando Valley.

The run is a Santa Monica Mountain classic, descending from the crest of the range along one long ridge nearly to the coast, and then ascending back to the crest on another. The views along the ridges are boundless, encompassing the Ventura Mountains, San Fernando Valley, San Gabriel Mountains, San Bernardino Mountains, Saddleback, downtown Los Angeles, Westwood, Santa Monica, Catalina and more.

Today, the high peaks east of the basin were capped by new snow, and in addition to Mt. Baldy, it was easy pick out San Bernardino Peak, far to the east. From near Skull Rock, Santa Monica Bay glittered in the sun, the shore of the Pacific extending in a graceful arc to Palos Verdes Peninsula and Catalina.

There were the usual muddy and wet sections that follow a good rainstorm, but other than one small rock and mud slide on the Rivas Canyon Trail, the trails were in surprisingly good shape. It was an outstanding run!