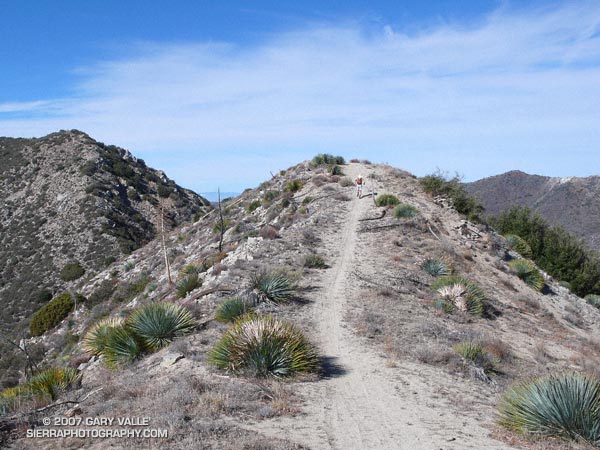 The temp was in the 30’s and it took a couple of minutes for my car’s engine to warm enough to thaw the coating of ice on the windshield. I was headed for a run in the San Gabriel Mountains and was wondering how cold it might be.

In a November in which 29 days had been bone dry, it had rained on the 30th, and temps had cooled dramatically. That was day before yesterday. This morning the sky was still a storm-cleansed blue, and except for a few passing high clouds, promised to stay that way. If the winds were not too brisk, it could be one of those invigoratingly crisp late Autumn days — cold in the shadows, but warm and pleasant in the sun.

About an hour later Miklos and I were working our way up the Condor Peak Trail (13W05), not far from the trailhead on Big Tujunga Canyon Road. At the parking area I had shed some extra layers and was now running in shorts and a light long-sleeve top. In the pack were an ultralight shell, gloves, and a headband.

About a 1/4 mile from the parking area we caught up to some hikers and their dogs. They asked us if we were headed “to the top.” I replied that we were doing Fox Mountain and Condor Peak, and would continue on to the Trail Canyon Trail.

“Do you have a car at the Trail Canyon trailhead?”

Twenty minutes into the run, we reached the point where the old trail jumps up from Big T and joins the main trail. From here we turned north, away from the highway, and began a long, winding, uphill course that would eventually reach the divide between Fox Mountain (5033′) and Condor Peak (5440’+). This meandering approach resulted in a very runnable section of trail that gains about 2500′ in 5.5 miles — an average 8.6% grade.

As the trail wound in and out of canyons, and from shadowed to sunny slopes, the temperature contrasts were startling. Within a few feet, we would stride from balmy, solar heated granite alcoves into frosty, refrigerated nooks near freezing. We estimated the difference in temperature to be 30-40 degrees.

Gradually we gained elevation, and in about an hour and a half we crested the broad divide at the base of Fox Mountain. From this point a short — but steep — path leads directly to Fox’s summit.

Deep in morning shadow, the east side of the peak was cold! The ground was frozen, and heavy frost covered fallen leaves of chaparral. A few strenuous minutes and we were atop the peak, relishing the warmth of the sun and the panoramic view. Mt. Lukens, Josephine Peak, Strawberry Peak and Mt. Wilson loomed nearby. Further to the east, beyond Mt. Waterman and Twin Peaks, Mt. Baldy glistened white with a new coat of snow. Dressed for running, and damp from the climb, chill breezes hurried us from the summit.

Peak to peak the distance from Fox to Condor is over two miles. That’s what the map says, but on the ground Condor looks deceptively close. Several false summits amplify the deception, and many a hiker has been deceived. Even having viewed the route from Fox and climbed the peak before, I still did not fully appreciate the distance.

The scramble up Condor was a little longer than the hike up Fox. The peak has twin summits at very nearly the same elevation. We were curious which summit would have the register and found it on the more westerly summit. To do both Fox and Condor only added about an hour to our run.

Back at the car we marveled at what an enjoyable run it had been. The perfect weather and nearly ideal grade of the trails seemed to make the run almost effortless. It isn’t always that way.

Note: Although the Trail Canyon drainage is relatively small, it appears to have generated some sizable flash floods and debris flows. The canyon forms a huge southwest facing “rain catcher.” During Winter storms, the canyon wrings water from moisture laden wind as it is funneled into and up its slopes.