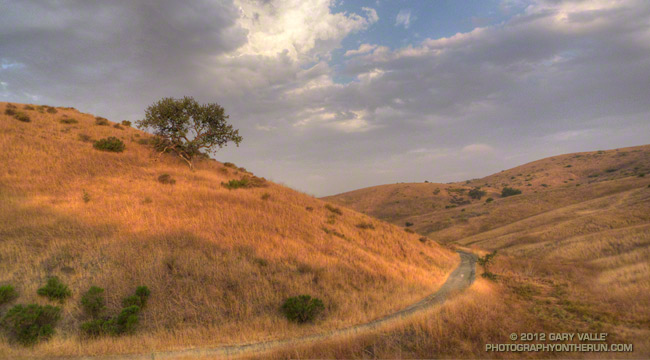 I didn’t catch the late evening update of the forecast when the 20% chance of showers and thunderstorms in the San Fernando Valley was extended into Saturday morning, but the raindrops on my car and the towering cumulus to the west were pretty good clues that I might get wet on my run.

A friend was doing the Baldy Run to the Top course, but one week out from the Mt. Disappointment 50K I’d opted for something a little more moderate — a 13.1 mile keyhole loop through Cheeseboro Canyon from the Victory trailhead at Ahmanson Ranch. The Mt. Disappointment course has a lot of elevation gain, and today the 1,300′ of gain/loss on the Cheeseboro Canyon run sounded a lot better than the 3900′ gain/loss on Baldy!

It sprinkled on and off as I made my way out East Las Virgenes Canyon and up Las Virgenes Canyon. A little while after turning onto the single track that leads to Shepherds’ Flat, the rain drops grew bigger and soon after I was running in a shower.

It is a rare thing to run in the rain on an August morning in the Simi Hills. It added a dimension not often found here in Summer, dampening sun-parched chaparral and refreshing its scents, smells and colors.

I reached the junction at Shepherds’ Flat and turned south onto the Cheeseboro Canyon Trail. As if signaling my turn, thunder rumbled through the hills behind me. It sounded like the active cell was a few miles to the north — probably over Simi Valley. The running in upper Cheeseboro Canyon was outstanding. I was there early and the main wave of cyclists were still working their way up the canyon, after waiting for the Cheeseboro parking lot to open.

The rolls of thunder were now growing more distant, and from time to time a shaft of sunlight would break through the clouds. Along the trail laurel sumac and Datura had captured small puddles of water in the V of their leaves, and occasionally the sun would glint from one leaf and then another.

With the showers and clouds, the temperature was almost chilly. If only we could have cool weather for Mt. Disappointment! Not likely — the MRF medium range computer model was forecasting a heat wave in Southern California over the next several days. Inland temps were forecast to peak race day (Saturday) with temps at the lower elevations of the San Gabriel Mountains reaching around 100 degrees. Some clouds and an afternoon thunderstorm were a possibility, but the degree to which monsoonal moisture would be pushed up into Southern California was a big question mark.

Update Wednesday, August 8, 2012. Measured some temperatures on a run at Ahmanson yesterday. Temperatures generally ranged from about 103°F to 108°F. There was a pretty good breeze with a lot of mixing. These were temps out in the open a few feet off the ground. Even with the breeze ground temps in full sun were over 120°F. Today’s 12z and 18z NAM shows valley temps peaking on Friday, with a little cooling on Saturday. An increase in monsoonal moisture is forecast into Saturday above about 10,000′, but dewpoints/humidities below that level remain relatively low. Hot temperatures (95°F to 105°F) are still forecast for Saturday in the lower elevations of the San Gabriel Mountains.

Update Tuesday, August 7, 2012. Yesterday Woodland Hills tied the record high temperature for the date of 108°F. This morning’s NAM weather model forecasts warming to continue inland through at least Friday, and this morning’s MRF still has the hottest inland temps on Saturday. The amount of monsoon moisture is still uncertain. The high pressure system is in a position that could transport moisture into Southern California, but so far the models are not forecasting a strong monsoonal flow.