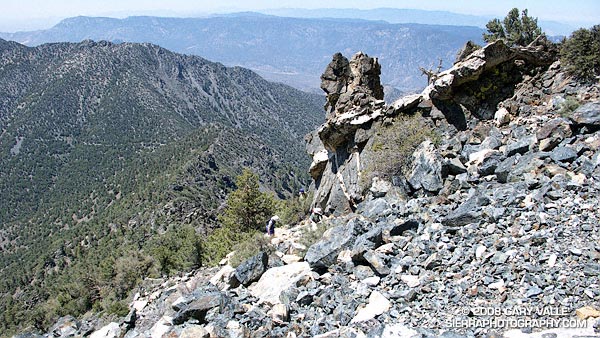 A good way to think of this adventure is as an excellent 17 mile trail run on the PCT north from Walker Pass (5217′), combined with a three mile scramble up and down the rocky southwest ridge of Owens Peak (8453′).

Based on the expanse of granite seen from Hwy 395, I had visualized the southwest ridge of Owens Peak as a somewhat vegetated but relatively clean  ridge. Wrong! The ridge is a geologically complex mix of fractured metamorphic, metavolcanic and gabbro rock capping the granite of Owens Peak. In most areas the rocky sections of the ridge are bounded by dense brush and pinyon pine.

We pretty much stuck to the crest of ridge on the way up, continuing up and over the steep outcrop just below the summit. Although it was an interesting section to climb, the outcrop was quite loose, and we dropped below it on the descent.

Owens Peak is relatively isolated, and the views from the summit are sweeping. To the north we could see Mt. Whitney, Mt. Langley, Olancha Peak, and the windblown crest of the Sierra between Army and New Army Pass.

Not everyone would see the positive aspects of doing a 10 mile route to a peak that could be done in only 3.5 miles — or enjoy the ups and downs, and somewhat tedious route-finding along a brushy and crumbling ridge. It’s an acquired taste. It was good to share the experience with enthusiastic friends who were still smiling as we jogged down the last yards of trail to the car.

Here’s a Google Earth image and a Google Earth KMZ file of a GPS trace of our route. GPS reception was weak at times on the way up and the track has been edited to remove some of the larger errors.

Note: After the Spring snowmelt, it appears there are no natural water sources on the PCT between Walker Pass and Owens Saddle (mile 8.6), or on the ridge.