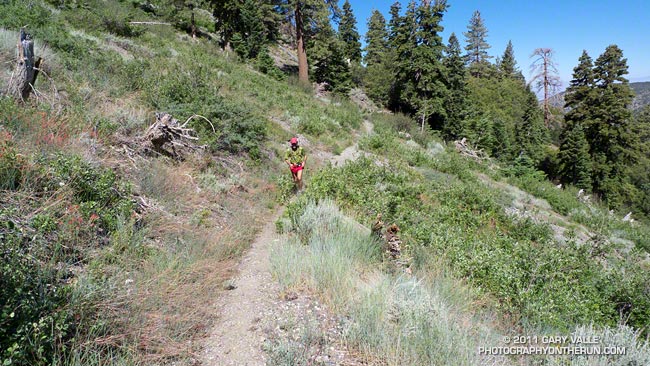 Some runs in the San Gabriels are more adventurous than others, and I’d mentioned to Devy that on this run we would likely have to deal with rock slides, washed out sections of trail, an annoying amount of bugs, and warm — if not hot — temperatures. We might even run into a bear. Devy is the owner of Andes Adventures, and having cut his trail running teeth exploring Peru’s Cordilleras Blanca and Huayhuash, his response was “sounds like fun, let’s go!”

The loop is a favorite, combining sections of the High Desert National Recreation Trail and Pacific Crest Trail. The route starts at Islip Saddle (6650′), descends to South Fork Campground (4560′), then climbs all the way back up the summit of Mt. Baden-Powell (9,399′). From Baden-Powell it returns to Islip Saddle on the PCT. It’s 23.5 miles of scenic single track trail with a cumulative elevation gain/loss of around 5700′. Done as part of a normal week of running, and with stops along the way, it usually takes about the same time to do this course as a hilly 50K race.

The South Fork and Manzanita trails are part of the High Desert National Recreation Trail. The 5.25 mile long South Fork Trail descends the rugged canyon of the South Fork of Big Pine Creek. Due to the tortured geology of the area — the San Andreas fault zone is nearby — the trail is in a constant state of change. Each time I’ve run it, its condition has been a bit different. It has many rocky sections, and at various points along the trail it is necessary to cross the debris from small rock slides.

According to the nearby Valyermo RAWS the temperature was around 80 degrees when we rolled into South Fork Campground. Not too bad. It would be near 100 later in the day, and it’s not uncommon for temps to hit the 90’s here by 8:00 or 9:00 in the morning. The (unmarked) Manzanita segment of the High Desert National Recreation Trail starts on the east side of the campground and in about 5.6 miles leads to Vincent Gap (6565′).

The news of the day was the condition of the Manzanita Trail. Sections of this trail have been washed out for several years, and after December’s record-setting rainfall it seemed the trail could only be worse. Surprise, surprise, the trail was mostly repaired! We didn’t even have to use tree roots for handholds!

Ah… the water at Little Jimmy Spring… Like last week, still so cold I thought it was going to give me an ice cream headache.