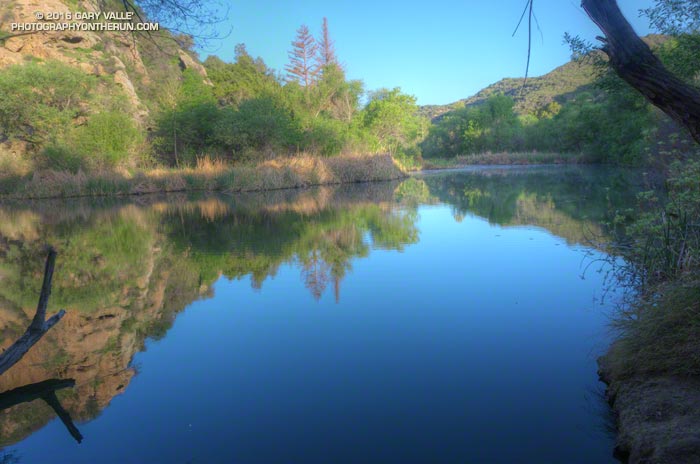 Illuminated by a just-risen sun, Goat Buttes reflected sharply on the lake’s surface. Ducks squabbled near some reeds and a bullfrog’s resonant croaking filled the canyon.

Part way through the Bulldog Loop, I’d paused for a moment at Century Lake in Malibu Creek State Park to enjoy the tranquility of the early morning. I snapped a photo and then noticed something very disturbing. The hundred year old coast redwoods across the lake looked brown.

I tried to convince myself it was just the golden hue of the warm morning light, but it wasn’t. From Crags Road I could see at least one tree appeared to be dead, and most of the others were highly-stressed, if not dying. A detour to the other side of the lake on the Forest Trail confirmed the bleak situation.

Although coast redwoods have been planted in several areas of Southern California, they do not occur naturally here. The southernmost stand of naturally-occurring coast redwoods is about 200 miles north of Malibu Creek State Park in the Southern Redwood Botanical Area of Las Padres National Forest.

Redwoods have widespread, but shallow, root systems. Drought and warming temperatures are a worst case scenario for these trees, with the upper layer of soil being moisture-starved and baked.

The redwoods appeared to be healthy in June 2011, August 2012, and January 2013. This photo was taken December 13, 2014 and may show the first hint of discolored and thinning foliage. On May 1, 2015 — just 4 1/2 months later — Google Earth imagery clearly shows several discolored trees.

Ironically the redwoods closest to the lake appear to be the most severely affected. This tree away from the lake on the Forest Trail appears to be in better shape, but it too is showing signs of stress.

Malibu Creek State Park isn’t the only locale in Southern California where redwoods are dying. According to this May 2015 San Gabriel Valley Tribune article, 15 redwoods were removed from Verdugo Park in Glendale, and redwoods in other areas of Southern California have also been affected.

As mentioned in an earlier post, the 2004 article “What’s up with the redwoods?” by James Downer, discusses a dramatic decline in coast redwoods planted in Ventura County and describes some of the problems that can affect this tree.

Drought and climate impacts are not limited to redwoods in Southern California. Endemic redwoods, particularly those in the southern extent of their range have also been significantly impacted.