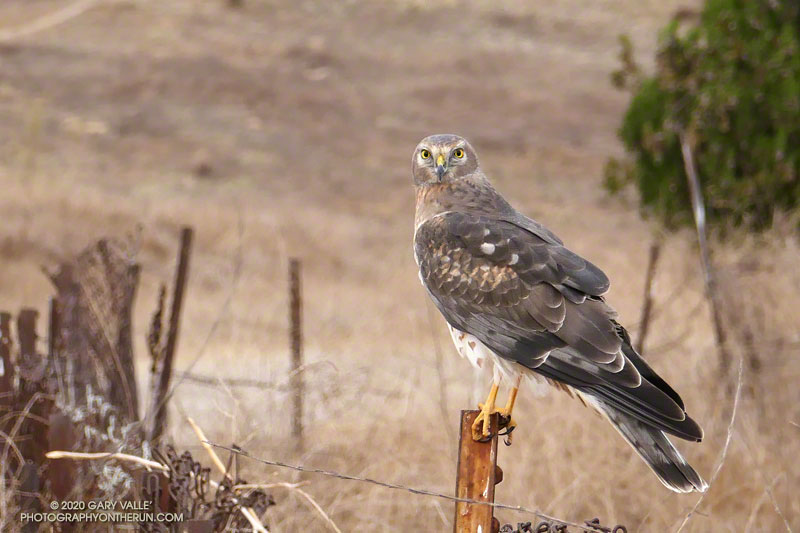 I turned the corner, and about 60 yards away, a large, gray hawk was sitting on a fencepost. It looked like it might be a male northern harrier. I stopped and took a couple of photos. If it flew away, at least I might be able to confirm the ID.

In my experience, northern harriers are shy birds, and in most of my previous encounters, the birds have been on the wing. Moving closer, I walked a few steps, took a photo, walked a few more steps, then took another shot. Astonishingly, I was only about 20 yards from the bird, and it did not fly.

That’s when I heard the fast-paced footfalls of another runner approaching from behind. I held my breath and continued to photograph the harrier. Whether spooked by my presence or the approaching runner, the bird had had enough, and he finally took flight.

Northern harriers, and harriers in general, are unusual birds. They have evolved to subsist in open areas such as grasslands and marshes. Their physical features reflect the requirements of efficiently hunting in these habitats.

Northern harriers are adapted to use vision and sound to hunt their prey. Like owls, they have a facial ruff and asymmetric ears that are used to amplify and locate sounds made by prey. They also are reported to have feather adaptations for flying more quietly.

They are powerful, acrobatic birds. Their wings and tail are extraordinarily large for their body size. In aerodynamic terms, they use variable geometry to maximize lift or glide as needed. In slow flight, they can turn on a dime, leaving virtual skid marks in the sky. During strong Santa Ana winds, I’ve seen them dynamically soaring (like an albatross) on slightly-sloped Lasky Mesa.

One time I photographed a pair of northern harriers hunting on Lasky Mesa after sunset. It was a surreal experience to watch them in the diminishing light. They appeared to be working cooperatively, and their hunt was successful.