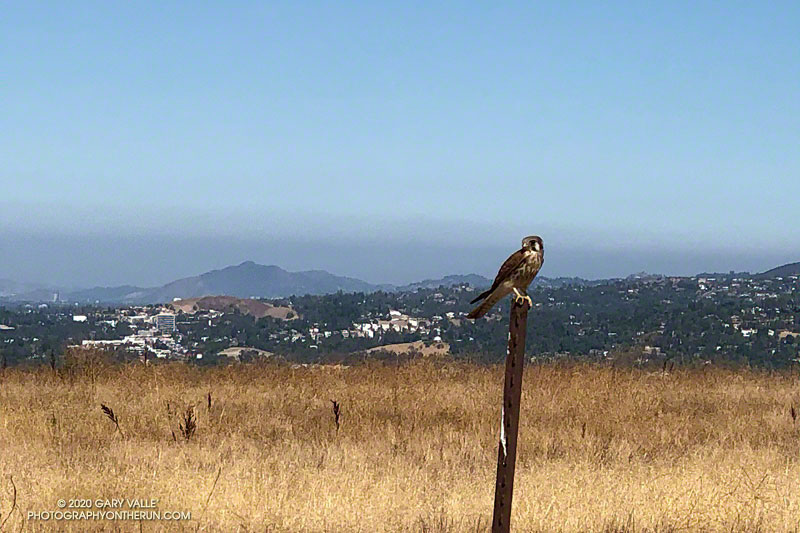 My weekday runs at Ahmanson Ranch will frequently include a dirt road on the east side of Lasky Mesa that is part of the Mary Wiesbrock Loop. There is a fence line along the road, and almost without fail, I’ll see a bird or two on the fence.

The most common fence-sitting birds on this stretch of road have been the Say’s phoebe, western kingbird, mourning dove, and lark sparrow. Occasionally, I’ve also seen a kestrel or northern harrier taking in the view.

While phoebes and kingbirds sometimes play bird games, hop-scotching from fence post to fence post, raptors are exceptionally wary and fly away at the slightest provocation.

Today, I was running down the road and spotted a dove-sized bird sitting on a fence post. As I approached, I could see that it was a kestrel and expected it to make a quick exit.

Slowing to a walk, I stopped directly across the road from the small falcon. It was about 20′ away, and didn’t take flight.

The only camera I had was my iPhone, so it had to do. I slowly took the phone out of my pack and tapped a camera app. The bird cooperated, and I took a few photos. But I wasn’t close enough.

Had the kestrel flown? I selected the 2X view. Still there. I took a couple more photos.

Finally, the falcon became impatient, and in a characteristic motion, jumped into flight.

This year I’ve seen kestrels on Lasky Mesa frequently, and suspect the mesa is about the right size for a mated pair’s territory.

Update August 5, 2020. The kestrels have been very wary lately, flying away just when I get within camera range. Here’s a photo of the male kestrel from this afternoon’s run.

Update July 30, 2020. I’ve seen at least one of the Kestrels just about every time I run on Lasky Mesa, but have been unable to approach anywhere near as close as described above. Here’s a photo of one of them perched on a fence post on the south side of Lasky Mesa. It was taken with the equivalent of a 230 mm telephoto lens. Based on its coloration in flight, it appeared to be a female.