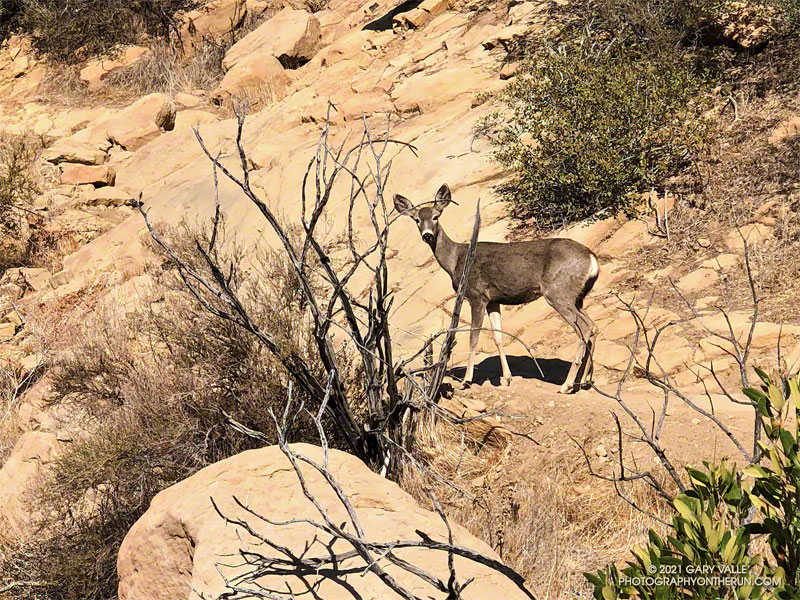 I saw a flash of brown through the bushes on the trail ahead. I stopped as a deer emerged from a switchback. The doe was walking slowly up the trail with her mule-like ears turned back toward me. I said something like, “Where are you going?”

She turned toward me and stared quizzically. As I slowly pulled the phone from my pack, I continued to talk. Her expression was a mix of caution and curiosity. It was as if she couldn’t quite make up her mind what I was about.

This was peculiar behavior for a deer in this area. It wouldn’t be so strange if I was at Trippet Ranch. The deer there graze around the oaks and grasslands near the parking lot and are used to seeing people. But in decades of running the Chumash Trail, I’ve only occasionally seen deer, and they have always been skittish and quick to react.

This doe watched me as I slowly walked around the bend and toward her. I was reminded of a friend’s experience, when he was hit on the shoulder by a spooked deer. Not wanting to force a reaction, I stopped. The deer casually stepped off the trail and disappeared down the ravine.

Later, running down Las Llajas Canyon, I was startled by the sound of something large moving in the brush. This time I got only a fleeting glimpse, as the deer bounded uphill through the trees, rocks, and brush. 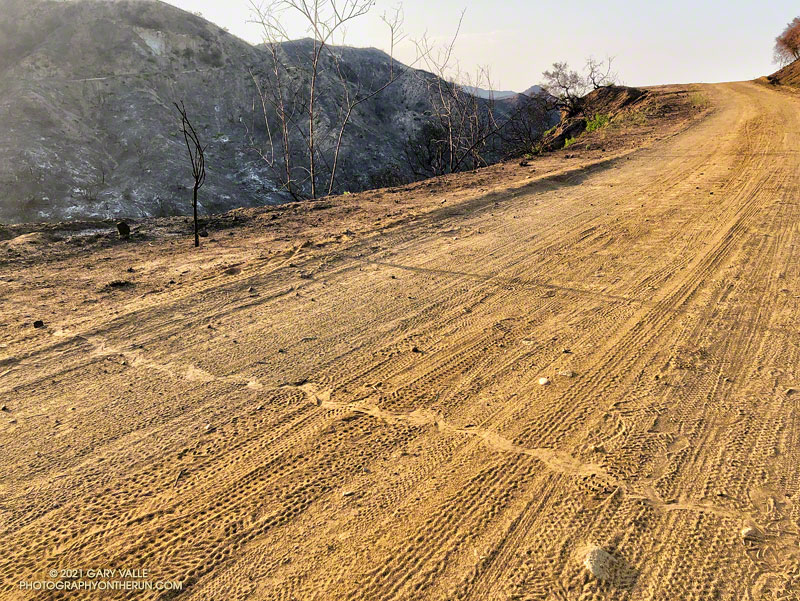 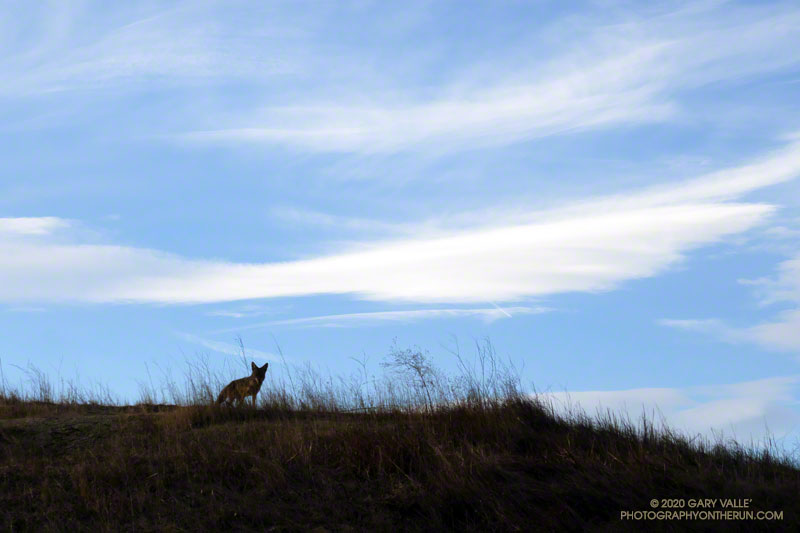 This afternoon I was running down a single-track trail at Upper Las Virgenes Canyon Open Space Preserve (Ahmanson Ranch), when I noticed a coyote on a parallel track across a small ravine. From time to time I would stop and watch the coyote, and from time to time it would pause and watch me. After a few minutes, it went its way, and I went mine.

Update February 18, 2021. The coyote pictured on the right was in the same area as the coyote in the title photo. When I first encountered the coyote, it had just crossed the trail and was below me. For some reason it reversed its course and climbed to a viewpoint above me, and watched as I ran up the trail. After a few moments it ran back down hill, retracing its original course across the trail. It was one of the most well-conditioned coyotes I’ve seen out at Upper Las Virgenes Canyon Open Space Preserve (Ahmanson Ranch).

The Overlook Fire Road in Pt. Mugu State Park was nearly empty. I’d seen only two hikers between the top of the Fireline Trail and the top of the Wood Canyon Vista Trail. Maybe it was the wind. There had been 20-25 mph wind gusts much of the morning. Along the ridgelines, the gusts were even stronger.

According to the NPS website, the Santa Monica Mountains National Recreation Area is the world’s largest urban national park. Wildlife in the Park is affected by issues resulting from the proximity of urban and wild areas. Among the problems are poisoning from anticoagulant rodenticides, limited genetic diversity, and vehicular deaths. Only by studying Park wildlife can we better understand and manage these and other issues.

Because water is usually available at several spots in Sycamore Canyon, it’s a great place to do a self-supported ultra-length trail run.

So far, today’s run had taken me from Wendy Drive in Newbury Park to Serrano Valley via the Old Boney Trail. I’d circled past the old ranch in Serrano Valley and then descended the Serrano Canyon Trail to Sycamore Canyon. A short jog south in Sycamore Canyon put me at the bottom of the Fireline Trail, which I’d followed up to the Overlook fire road.

Next up was a scenic loop in La Jolla Valley. After that, I would work my way back to the Upper Sycamore Trail via Sycamore Canyon. From there, it would only be a few miles back to the Wendy Drive Trailhead.

The Santa Mountain Mountains Trails Council has been hard at work. Even though they can’t currently accept volunteer assistance, it looked like the Old Boney, Serrano Canyon, and Upper Sycamore Trails had been recently maintained.

I turned the corner, and about 60 yards away, a large, gray hawk was perched on a fencepost. It looked like it might be a male northern harrier. I stopped and snapped a couple of photos. If it flew away, at least I would be able to confirm the ID.

I was running on Lasky Mesa, a unique oak and grassland area in Upper Las Virgenes Canyon Open Space Preserve. Better known as Ahmanson Ranch, the area is adjacent to West Hills, a suburb of Los Angeles. The open space park is a haven for several species of raptors, including red-tailed hawks, American kestrels, northern harriers and white-tailed kites.

In my experience, northern harriers are shy birds, and in most of my previous encounters, the birds have been on the wing. Moving closer, I walked a few steps, took a photo, walked a few more steps, then took another shot. Astonishingly, I was only about 20 yards from the bird, and it did not fly.

That’s when I heard the fast-paced footfalls of another runner approaching from behind. I held my breath and continued to photograph the harrier. Whether spooked by my presence or the approaching runner, the bird had had enough, and he finally took flight.

Northern harriers, and harriers in general, are unusual birds. They have evolved to subsist in open areas such as grasslands and marshes. Their physical features reflect the requirements of efficiently hunting in these habitats.

Northern harriers are adapted to use vision and sound to hunt their prey. Like owls, they have a facial ruff and asymmetric ears that are used to amplify and locate sounds made by prey. They also are reported to have feather adaptations for flying more quietly.

They are powerful, acrobatic birds. Their wings and tail are extraordinarily large for their body size. In aerodynamic terms, they use variable geometry to maximize lift or glide as needed. In slow flight, they can turn on a dime, leaving virtual skid marks in the sky. During strong Santa Ana winds, I’ve seen them dynamically soaring (like an albatross) on slightly-sloped Lasky Mesa.

Previously, I photographed a pair of northern harriers hunting on Lasky Mesa after sunset. It was a surreal experience to watch them in the diminishing light. They appeared to be working cooperatively, and their hunt was successful. 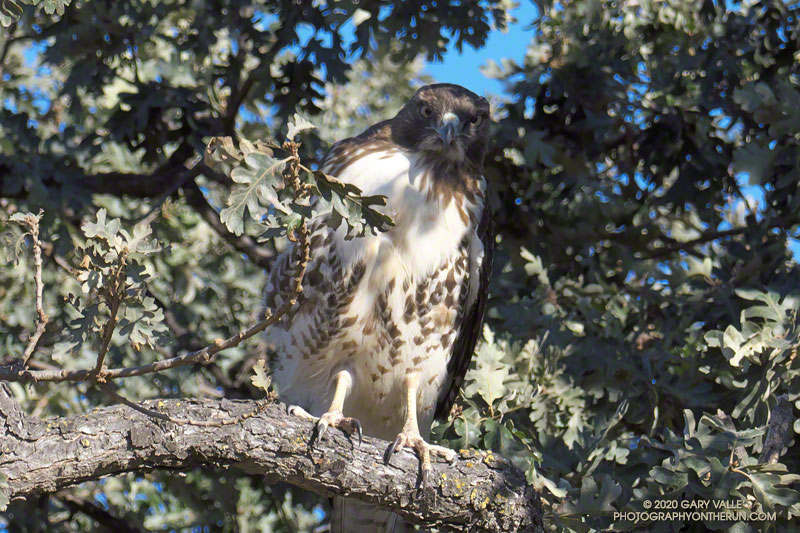 The afternoon was full of Fall. Oak leaves danced in a cool breeze, their shadows producing a familiar speckled pattern of shadow and sun, shadow and sun.

I was running northeast along the margin of Lasky Mesa in Upper Las VIrgenes Canyon Open Space Preserve, enjoying the Fall weather and smoke-free sky. I’d just passed a valley oak along the dirt road, when a thought bubbled up from my subconscious and asked, “Did you see what I saw in that tree?”

I stopped, turned around, and walked the few steps back to the oak tree.

Just feet from the road, partially camouflaged by oak leaves and shadows, was a red-tailed hawk. It seemed surprised, if not indignant, to have been discovered. I was equally astonished to have seen the bird.

The pattern of its plumage now made perfect sense. The hawk had been nearly invisible while feet away and in plain sight. I took one more photo, and then left the bird to its reverie.

I smiled as I ran down the road, and wondered if this was the same hawk that had buzzed me in Red-tailed Hawk Encounter.

Update November 14, 2020. Was near the spot where the encounter described above occurred and photographed a red-tailed hawk with a small rodent it had just killed. Since it’s in the same area, it may be the same bird.