The race was going well. We’d made the 3:05 p.m. cutoff at West Fork (Mile 26.5 of the 50K) with an hour to spare and I was feeling good. One reason was that temps for the race were not nearly as hot as in 2017 and 2018. For the most part heat had not been an issue. Even so, with the clear sky and strong sun, it had still been toasty on the climb up to Lawlor Saddle and descent from Red Box.

On the way down from Red Box, I’d started running with German, who was running the Angeles National Forest Trail Race (ANFTR) as his first 50K. He’d run the Los Angeles Marathon a few months before and was curious to see what ultras were all about. He knew he’d picked a good one. I told him the ANFTR/Mt. Disappointment 50K was a favorite, and one of the best organized races that I had run. 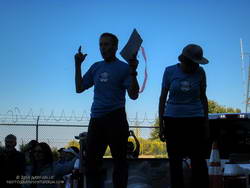 Born in the ingenious mind of RD Gary Hilliard in 2005, the ANFTR/Mt. Disappointment races are unique. Most mountain ultras start low, climb to one or more high points, and eventually descend to the finish. The ANFTR/Mt. Disappointment courses do the opposite. They start on top of Mt. Wilson, and many miles later, finish with a grueling 5.5 mile, 2600′ climb from West Fork back to the top of Mt. Wilson.

We’d refilled at West Fork, taken a couple of minutes to cool down, and then had continued west on the Gabrielino Trail, jogging the level stretches and avoiding the poison oak prevalent on that section of trail. Reaching the Kenyon Devore Trail, I said something like, “The fun begins!” and we headed up the steepening trail. Both of us had done Kenyon Devore recently in training, and I’d done it many times in previous ANFTR/Mt. Disappointment races.

I felt the first twinge around mile 29. Just a little flicker in an adductor. I’m used to this. Although I’ve not had any chronic mechanical issues with my knees and feet, in about two-thirds of my 50K and longer races I’ve been hit with leg cramps. Researchers refer to this type of cramping as Exercise-Associated Muscle Cramps (EAMC).

EAMC is no fun at all. The cramps, usually in the active leg muscles, can be intense and painful. They often occur late in a race — right around the time you’re getting excited about finishing and want to pick up the pace on the final few miles of the course. They are disconcerting and frustrating.

I’ve researched EAMC for many years, followed the science, and tried many remedies and solutions. Everyone has their favorites. Two of mine are pickle juice and jalapeño chips. Nothing I’ve tried has worked reliably and the research I’ve reviewed suggests there is no magic bullet for dependably preventing this type of cramping.

Much has been written about EAMC. Following are links to a couple of papers that summarize some of the research:

– A Narrative Review of Exercise-Associated Muscle Cramps: Factors that Contribute to Neuromuscular Fatigue and Management Implications

This VeloNews Fast Talk podcast from August 2017 discusses the physiology, prevention and treatment of cramps with experts in the field:

Like many who experience EAMC, I seldom get cramps in training runs — even very long and difficult training runs. For those of us that are prone to cramping, there are a multitude of interrelated factors that determine if cramping occurs, and if it does, how severe the cramps will be.

The most common scenario for me is that somewhere in the last few miles of a race I will feel a twinge in an adductor or hamstring. I’ll stretch; drink more water; maybe take an electrolyte tab or two and continue. Sometimes that will be that, but more often than not, the twinges develop into a familiar cycle of disruptive cramping — a sequence of the adductor and hamstring muscles in one leg cramping, followed sometime later by the adductor and hamstring in the other leg.

Once cramping starts, I walk. In my experience, walking usually helps to alleviate the cramping, particularly on level and downhill sections. If I can keep moving the cramps will often resolve in a few minutes. Then I can continue more or less normally, and can go back to running. Once the cramps have cycled through both legs, they usually don’t reoccur.

This time around I’d continued to feel various twinges, and then around mile 30, WHAM! It felt like every muscle in both legs cramped at once. I had no choice, but to sit down in the middle of the trail.

I’d been telling German about my cramping woes, so he wasn’t caught totally off guard. In the middle of all the drama, I kept saying I had to get up and get moving — not because I was worried about the time — but because I thought it would help resolve the cramps. At one point the cramping started to subside, but just trying to stand up was enough to trigger them again.

Eventually I was able to stand and slowly start hobbling up the trail. It seemed like I had been sitting for a long time, but according to my GPS track, we were only stopped for about 5 minutes.

At first, I had to be very careful about re-triggering the cramps. There were a few places where the trail steepened, and I could feel I was on the brink of cramping again. Keeping a constant, easy pace that didn’t overtax any individual muscle group was key. Gradually, I was able to resume a more normal gait. Not wanting to cramp again, I kept the pace slow.

My legs behaved for the remainder of the climb, and German and I happily reached the top of Mt. Wilson and crossed the finish line with a smile. We even jogged the last few steps! I congratulated him on finishing his first 50K and thanked him for hanging with me through the cramping episode. After finishing, I walked around for about 10 minutes. In my experience this helps to keep the post-race cramps at bay, and they didn’t reoccur.

As in every race in which I’ve cramped, I’ve asked myself what I might have done differently. I was heat-acclimated. I did several ANFTR-specific training runs starting and finishing at the top of Mt. Wilson. Maybe these runs could have been longer, done at a faster pace, or in combination with another strenuous run — with the idea of being more fatigued on the climb back up the peak. My fueling and hydration seemed to be pretty good, but maybe I need more carbohydrates and fluids than I think. I tapered normally, but have noticed in other races that less of a taper may help with cramping. One thing that might have really helped on this course is the use of trekking poles.

Follow-up December 2019: I had no cramping at all during the Kodiak 50K in August, but did have some moderate leg cramps during the Rocky Peak 50K in October.

This was my twelfth finish of the ANFTR/Mt. Disappointment 50K. It is a challenging, superbly organized race on a spectacular course. Many, many thanks to RDs Gary & Pam Hilliard; the aid station and ham radio volunteers; Sierra Madre SAR; Angeles National Forest; the race sponsors; and all those that make this such an outstanding event.

See the ANFTR web site, Facebook page and Facebook group for more info. All the results for the ANFTR/Mt. Disappointment races since 2005 can be found on Ultrasignup.com.