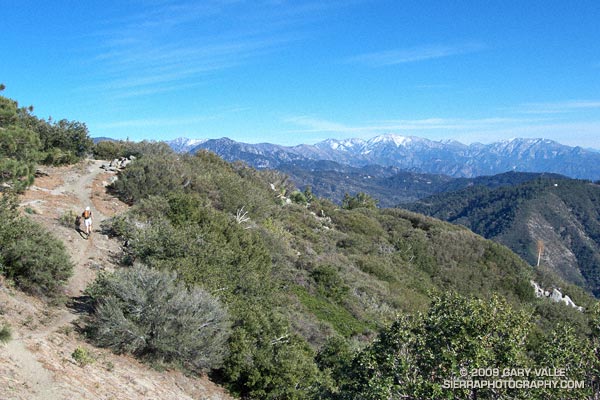 My legs were still pretty worked from the Boney Mountain Half Marathon. Instead of backing off of the pace on my weekday workouts, I had continued to experiment with a change in running technique that was resulting in faster paced runs. I was excited about the increase in speed, but logging fast times on oft-run courses after a strenuous race doesn’t equal recovery. Neither does blasting up a peak in the San Gabriel Mountains.

But it was one of those impossible to ignore, blue sky, short-sleeved Southern California Winter weekends. This would be an unprecedented eighth straight January day that the high temperature in Los Angeles exceeded eighty degrees. In the yin yang of weather, the western half of the U.S. has been enjoying unusually warm temps, while the eastern half of the country shivered.

Taking maximum advantage of the good weather, yesterday I had done a little kayaking on the Kern River, this morning some rock climbing at Stoney Point, and now we were huffing and puffing up Strawberry Peak (6164′) — and doing it “for time.”

We had started at Red Box, the shortest and technically most moderate way to climb the peak. By this route it’s about 3.4 miles to the summit, with an elevation gain of roughly 1600 ft. About two-thirds of that distance is well-graded trail, the rest is steep use trail up a broad, brush covered ridge.

About halfway between Lawlor Saddle and the summit of Strawberry it became plainly and painfully evident that my legs had given their all. I complain. Miklos — always sympathetic — asks why I can’t go any faster.

On the final steep push to the summit ridge I try a different tactic to slow the pace, and tell a story about an unbelievably angry and aggressive raccoon I once encountered near here. But like President Jimmy Carter’s rabbit incident, it loses something in the telling. Redlined, we crest the summit ridge and sprint (relatively speaking) toward the summit.

On the summit, there is not a breath of wind. The view is exceptional. To the southwest, sunlight gleams on the waters of the Pacific near Palos Verdes, and to the west snow gleams white on Mt. Baldy. Some 90 miles distant, near Palm Springs, is the asymmetric silhouette of Mt. San Jacinto.

Soon we’re headed down. As I drop below the summit ridge, a snowball whizzes past my ear, crashing on the trail ahead. It has been warm and dry for weeks, but remarkably, there are a few patches of snow. It is a reminder that Winter is not over, and like the snow, is lurking in the shadows.