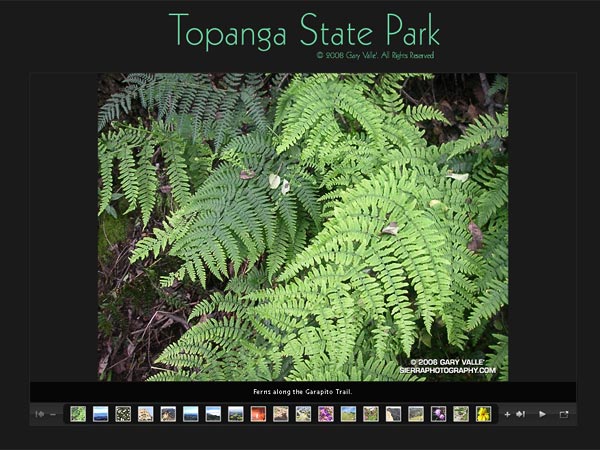 Update May 30, 2009. In a Draconian measure that could close over 200 of California’s State Parks, Gov. Schwarzenegger has proposed cutting the State Parks core funding in half begining July 1, and then would eliminate ALL core funding in a year. For more information see the California State Parks Foundation web site.

Update May 18, 2008. Gov. Schwarzenegger’s revised state budget, released May 14, rescinded the funding cuts that would have resulted in the closing of 48 California state parks. For now it appears these state parks will remain open.

What a fantastic morning! Taking advantage of a break in a series of Southern California rain storms, I was running on Fire Road #30 near the entrance of Topanga State Park. The sun had found its way through a broken layer of clouds, and bright patches of sunlight highlighted the rugged terrain. Down in a steep canyon on my left, wisps of steam wafted from the chaparral.

Following an  “On your left!” a group of mountain bikers swept past. Working up the hill toward the Hub, good morning’s were exchanged with other runners, hikers and cyclists.

Many of us live and work in California because of its diverse open spaces, parks and wilderness areas. Incredibly, this popular urban park, along with Will Rogers State Historic Park, Santa Susana SHP, Los Encinos SHP, Mt. San Jacinto SP, and forty-four other California State Parks have been slated for closure in the fiscal year 2008-09 California state budget.

According to an article in the Los Angeles Times, the selection was made according to the dour formula of those parks “that had the fewest visitors, produced the least revenue and would be the easiest to close off to visitors.”

This formula necessarily targets less developed parks, such as Topanga State Park, ignoring those intrinsic values that make a park a park. The formula targets walk-in parks, and the hikers, cyclists, riders, and runners that simply enjoy the outdoor experience. The formula targets day use parks in urban areas that don’t need campgrounds or additional services. And, the formula targets those with less to spend on recreation.

So is this how we are to appraise the value of our public lands? Closing our state parks would be astonishingly short-sighted. Their varied trails, terrain, and habitats are accessible to millions, providing a therapeutic escape from the rigors of city life, and experiences and insights that can only be gained from the out of doors.

Today I was doing one of my favorite runs in Topanga State Park. It links several trails and visits several popular destinations in the park — the Hub, Parker Mesa Overlook, Trippet Ranch, Eagle Rock, and the Musch, Garapito and Bent Arrow Trails.

This two minute slide show is a compilation from a few such runs. It is a small selection of photographs from one set of trails, in just one state park.