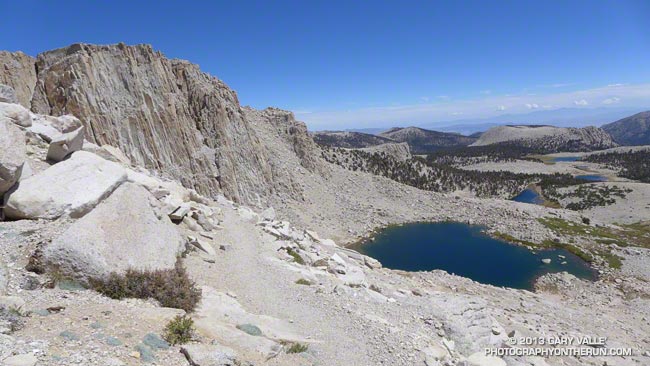 The Cottonwood Pass – New Army Pass loop is one of the best 20+ mile mountain trail runs that can be done as a day trip from L.A. You don’t have to get up any earlier than for a local race, and even if you want to get back to the city by 8:00 pm or so there’s still time to enjoy the sights and serenity of the high mountains.

The monsoon has been active this Summer and more than once I postponed this run because of a threat of thunderstorms. As late as midday yesterday (Friday) the forecast had been for increasing clouds and a chance of thunderstorms, as the moisture from Tropical Storm Lorena was drawn into the area.

It may seem like a no-brainer, but it’s worth waiting for good weather to do this run. The views aren’t that great from inside a cloud, and there’s enough going on that you might as well try to eliminate the complications poor weather can create. I always try to carry enough to get by if things go sideways. You can’t avoid all risk, but you can be smart about the risks you take. Decades of climbing, kayaking and skiing adventures have shown me both sides of that adage.

This time I hoped the weather would cooperate. With a race on the schedule for September 21, and allowing for taper and recovery, it looked like today might be my last chance to do the Cottonwood loop this year. The main influx of moisture wasn’t expected until Sunday, so it looked like any thunderstorm development would probably be later in the day and isolated.

As it worked out the weather did cooperate. The flow of moisture into the area was delayed, and except for some clouds off to the east and southeast, it was another blue skies, sunshine and short-sleeves Sierra day.

– It’s incredibly scenic. You run along high mountain lakes and meadows, in glaciated canyons, and over high passes.

– It has long runnable stretches. The longest is from New Army Pass back to the car, but there is also good running on the Pacific Crest Trail west of the crest, and as you leave Horseshoe Meadows at the beginning of the run.

– It is cool on a hot summer’s day. As long as you have extra layers in your pack, and pick a good day, the run can often be done in shorts and short-sleeves.

– It crosses the Sierra crest twice, at Cottonwood Pass (11,160′) and New Army Pass (12,300′). New Army Pass is the third highest Sierra pass crossed by a major trail, and is a spectacular vantage point.

– There is a moderate amount of elevation gain — approximately 3500′.

– Except for one key turn off the PCT that connects to the Rock Creek Trail, the route-finding is relatively straightforward. If you miss that turn you’re going to be doing a much longer run. Take a map!

– Runs through forests of gnarled southern foxtail pines – a close relative of the bristlecone pine. Some of the trees may be a 1000 years old. Some of the dead trunks at higher elevation are several thousand years old and have been studied to see how the tree line has changed in the Sierra.

– The route is a loop. I’ve done it both directions and prefer doing it clockwise — going first over Cottonwood Pass, and then New Army Pass.

– Snow often persists near New Army Pass well into Summer and small, shaded patches may last through Fall. While it’s fun to see a huge cornice of snow in July, it can also be a problem. If you don’t have mountaineering experience be sure the trail over New Army Pass is clear before doing this loop. Don’t force the issue. The pass is at about mile 12.5. If you turn around at the pass and reverse the route you’ll be doing a 25 mile run instead of 21. 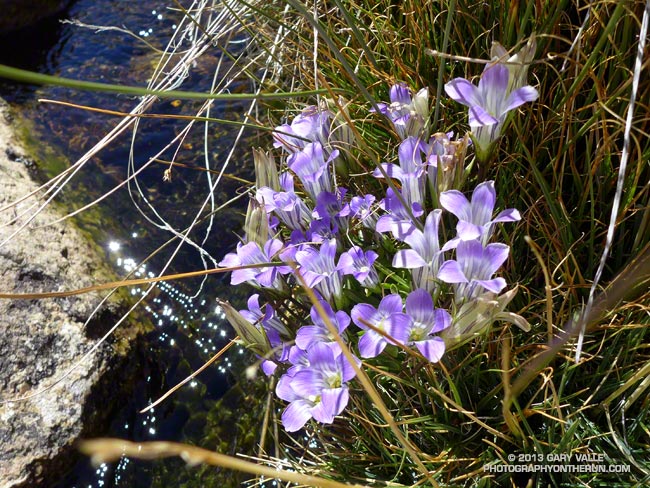 – The drive up the switchbacks on Horseshoe Meadows Road is nearly as exciting and scenic as the run.

– Can check the weather on a web cam. Olancha Peak is on the right and New Army Pass and Mt. Langley on the left.

– Can check the temperature and snowpack at 10150′ using the Cottonwood Lakes snow sensor.