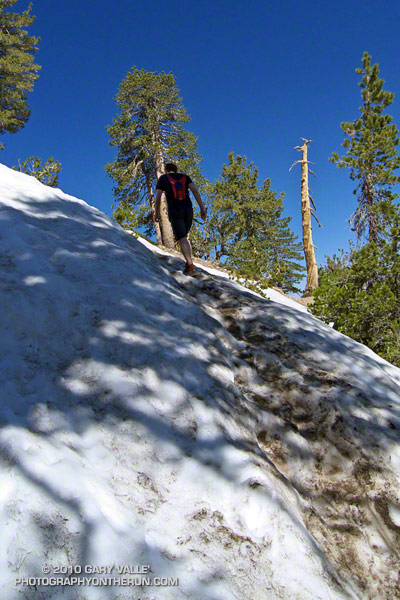 Brett was down for Father’s Day, and today we hiked/ran Mt. Baden-Powell (9399′). Baden-Powell is one of the most popular peaks in the San Gabriel Mountains, and several of my favorite trail runs visit its summit. 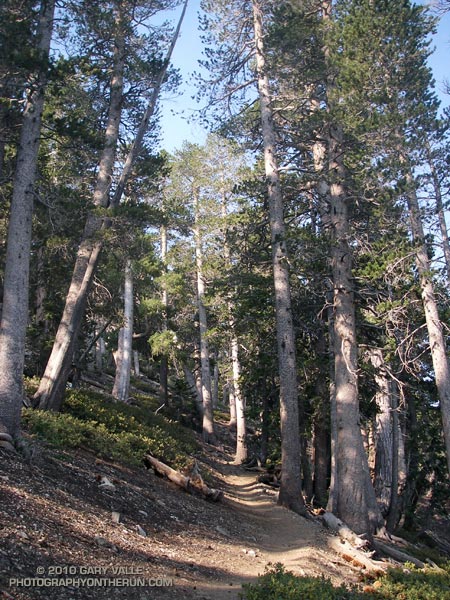 The trail from Vincent Gap switchbacks up through an old-growth forest of Jeffrey pine, sugar pine, white fir and lodgepole pine. There are some impressive trees. The Wally Waldron Limber Pine, near the summit, is estimated to be 1500 years old, and some limber pines in the area are thought to be even older.

Today, the weather was perfect for pushing the pace. Along the trail fresh green growth could be seen on limb tips of the white firs, and yellow wallflower, red paintbrush, and blue larkspur added a mix of color to the understory.

Not far from the trailhead we had seen fresh Vibram FiveFinger (VFF) tracks headed up the trail, and we were talking about the minimalist shoe. Today Brett was in conventional shoes, but on his home trails about half his runs are in VFFs. He was recounting how the specialists doing a video gait analysis had been blown away when he switched from regular running shoes to VFFs.

I had asked Brett how many miles he had logged on his VFFs, but before he could answer, our conversation was interrupted by a loud shout of “25!” from somewhere on the trail above. A couple of minutes later, and a bit closer, there was another shout of “24!”

Named after the founder of the scouting movement, Mt. Baden-Powell is the culminating point of the scout’s Silver Moccasin Trail. Most summer weekends you’ll find one or more youth groups on their way to the summit of Mt. Baden-Powell. This enthusiastic group was counting down and calling out the 38, 40 or 41 switchbacks (depending on the reference) on the way to the summit.

One of the more interesting hikers on the trail was a hard looking Royal Marine veteran that was thru-hiking the Pacific Crest Trail. Hoping to minimize snow issues on the high Sierra passes, he was a little behind the main wave of PCTers. He had stopped at Lamal Spring to fill some water bottles, and told of hellish temperatures in the desert.

Here the temps had been nowhere near triple digits, but a considerable amount of snow had melted in three weeks since I had last been on the peak. Even so, there were still some large patches of snow on the steep slopes north of the summit, and on the north side of the ridge extending west to to Mt. Burnham.

After topping out, we hiked out along the scenic south ridge of the peak. To the southeast, across the mile deep chasm of Vincent Gulch, some ribbons of snow could still be seen on Mt. Baldy’s north face. After a few minutes we returned to the summit, and began the much easier run down the peak. It was a great way to spend Father’s Day!