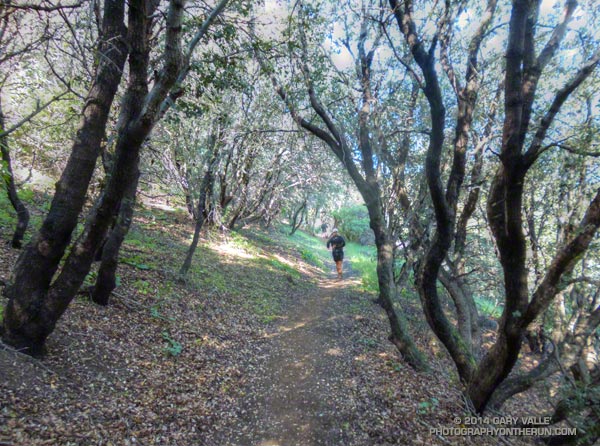 Last June when she heard the news that the Powerhouse Fire was burning in the Leona Divide area of Angeles National Forest ultra RD Keira Henninger must have shaken her head. Just a couple of weeks before the Springs Fire had burned a large part of her Ray Miller 50M/50K course in Pt. Mugu State Park — now the Leona Divide 50M/50K course was on fire.

Some organizers might have just canceled these events outright, but applying the expertise and persistence that makes her a successful ultrarunner and race director Keira put together alternatives that were every bit as enjoyable, challenging and well-organized as the original events. The Ray Miller 50/50 was transformed into the highly regarded Sean O’Brien 50/50 and the Leona Divide 50/50 course was rerouted. 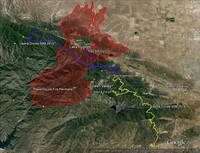 If you didn’t know its history, the 2014 Leona Divide 50/50 was so well organized you might have thought it always started in Green Valley. This year all but a few miles of the 50M and 50K courses were run on the Pacific Crest Trail. Here’s an overview of the 2014 course and an interactive Cesium browser View that can be zoomed, panned, tilted and rotated. 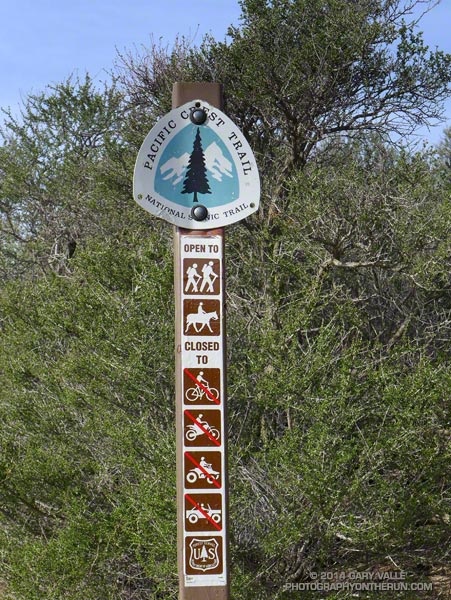 The weather for the race could not have been more different than the torrid conditions experienced last year. The NWS issued a winter weather advisory for the Los Angeles County mountains Friday evening that extended into Saturday. Just before the start of the race my car’s thermometer read 37 degrees. It had rained overnight and a few miles into the race, small patches of melting snow were mixed in with the purple chia along the trail. Temps were cool all day, ranging from from the low 40s up into the 50s. Winds were blustery, but were generally less than the 25-35 mph that had been expected.

All things considered, the weather was great for running. If you had any doubt the role heat acclimatization can play in finishing an ultra, you need only compare this year’s six DNFs in the 50 mile to last year’s 42! 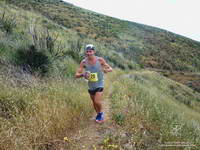 My favorite part of the course was the “last minute” addition from Bouquet Canyon to Aqua Dulce. I previewed this segment last week, and in today’s cool, blue sky – puffy cloud conditions it was outstanding. Because I HAD to make the cut-offs, I didn’t take many photos, but here are a few photos taken along the way.

Many thanks to Keira Henninger, the numerous volunteers, the community of Green Valley, the Pacific Crest Trail Association and the Mojave Ranger District for helping to make this event happen. Congratulations to Jay Bonthius, the overall winner in his first 50 mile race, and Kami Semick who took first among the women and placed 10th overall. In the 50K Eric Lynch just edged Chris Glibert for the win in the Mens division and Margaret Nelsen was first in the Women’s division. For more info, photos and all the results see the Leona Divide 50/50 web site and Facebook page.

Some related posts: Up and Over Sierra Pelona Ridge, Back on Leona Divide