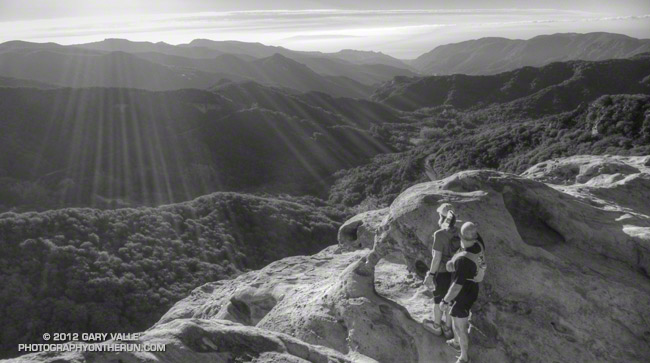 Well, actually you could see some snow on Mt. Baldy and the higher peaks of the San Gabriel Mountains, but that snow was 50 miles away. So far there had been a little frost in the shadows and mud in the low spots of the fire roads of Topanga State Park, but not a patch of snow in sight.

Lynn & Frank were heading back to the land of rain and snow for Christmas and there WAS snow on their local trails. More snow and bone-chilling temps were in the forecast, and a long snow-free run in the Santa Monica Mountains was a great way to celebrate the holidays!

With a couple of short side trips the distance from the End of Reseda (Marvin Braude Mulholland Gateway Park) worked out to about 21 miles. The distance and elevation gain were about the same as last Saturday’s run — also on the Backbone Trail.