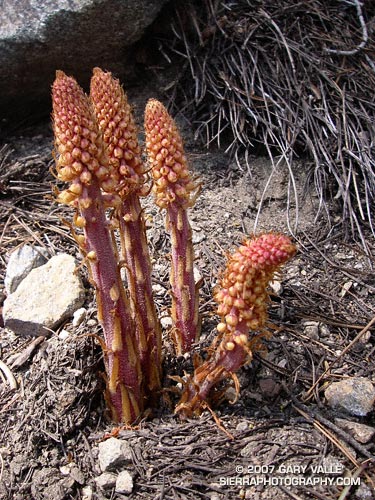 Pine drops (Pterospora andromedea) and snow plant (Sarcodes sanguinea) are related nonphotosynthetic plants that are found under pine and related trees, primarily in the mountains of the western U.S.

At one time it was believed that these plants were saprophytes, and obtained needed nutrients directly from decaying organic matter in soil. However, research has revealed a more complex parasitic relationship in which the plant obtains carbohydrate from a pine tree, by way of a shared mycorrhizal fungus.

The photograph was taken on the run described in Heat Wave, on July 16, 2006.