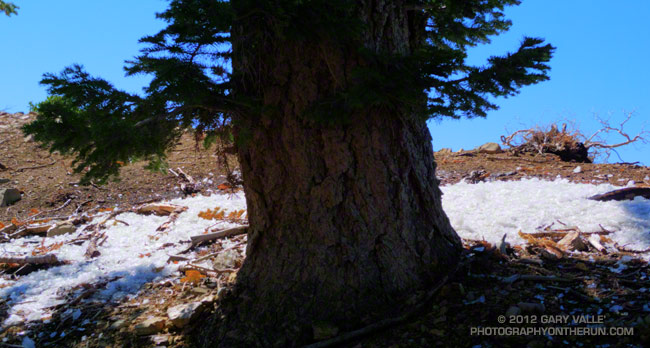 As I ran across the ice my footfalls made a loud crunch, crunch, crunch. Nearby a barrage of rime cascaded from a white fir. Friday’s cold system had rimed the trees along the crest, and now the ice was thawing, shedding from the branches and creating a patchwork of white beneath the trees. The ice wasn’t dense but I still didn’t want a large chunk falling on my head!

I was running on one of the most scenic segments of trail in the mountains of Southern California — the Pacific Crest Trail between Mt. Hawkins and Mt. Baden-Powell. There are three trail runs I like to do that include this stretch: Inspiration Point to Islip Saddle on the PCT, the Islip Saddle – South Fork – Baden-Powell Loop, and the route I was doing today, the Out and Back to Mt. Baden-Powell from Islip Saddle.

Warmer weather was forecast today, but this morning it had been cool and blustery at Islip Saddle. The temperature in the sun-warmed — but windy — parking lot had been around 43°F. In the shade of Mt. Islip at the start of the run the temperature felt like it was in the 30s. It had taken a while to warm up chugging up the first long hill.

It was the first time this season I’d been on this stretch of trail and I wondered if any well-shaded patches of snow had managed to survive on the north side of the crest near Mt. Baden-Powell. I doubted it. The Mt. Waterman ski area never opened this year, and there had already been several periods of warm weather. There would probably be some remnants of snow on the north side of Mt. Baldy.

It was PCT season. Islip Saddle is at about the 386 mile mark on the Pacific Crest Trail and PCTers hiking the trail from the Mexican border to the Canadian border usually do this section of trail sometime in May. There were a number of PCTers on the trail, including a couple of guys that appeared to be fast-packing the PCT. Their packs looked light, and they were really booking on the downhill west of Mt. Hawkins. (For well done, downloadable PDF maps of the PCT — with notes — check out Halfmile’s Pacific Crest Trail Maps and GPS Information.)

Although chilly at the start, the weather was near perfect for running and I had expected to see at least a couple of groups of runners training for the AC100. There were only about six or seven long run weekends remaining before this hundred miler. I did see one AC100 runner — twice. He was on day two of a three day Memorial Day training stint that would total some 90 miles. Now that is serious training!