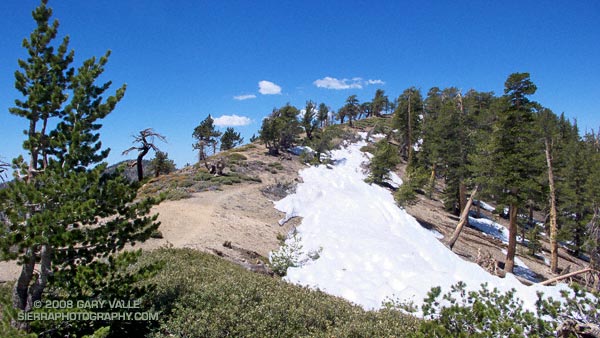 When considering where I might run this weekend, the words “snow” and “altitude” had a certain appeal. Record high temperatures had been set in the Los Angeles area on Friday and Saturday, and there was little doubt that more temperature records would fall today.

A couple of weeks before I had dodged a few remnant snow drifts on Pleasant View Ridge. From that vantage point you could see that there was much more snow on the steep, north facing slopes along the ridge between Mt. Islip and Mt. Baden-Powell. The S-shaped ridge spans a distance of several miles and links five peaks over 8000 ft: Mt. Islip, Mt. Hawkins, Throop Peak, Mt. Burnham, and Mt. Baden-Powell. Two of the peaks, Mt. Baden-Powell and Throop Peak, exceed 9000 ft. Today, the plan was to do these five peaks as part of an approximately 17 mile out and back route from Islip Saddle, enjoy the snow before it melted, and try to escape the triple digit temps of the lowlands.

Logistically, the difficult peak is Mt. Islip. While the other peaks can be done with relatively minor deviations from the trail, Mt. Islip stands alone, more than a mile from the PCT at Windy Gap. This time I opted to climb Mt. Islip from Islip Saddle via the northwest ridge. I’ve been investigating stunted Jeffrey and Sugar pines found along the windswept ridges of the San Gabriels, and this direct approach would give me the opportunity to check out more trees.

That was this morning, now I was on by way back from Mt. Baden-Powell, and about a quarter-mile east of Throop Peak. Hot, thirsty, dispirited, and nearly out of water, I had stopped to dig into the side of a dirty snowbank– attempting to get to snow that at least looked clean. The air temperature was eighty-something, but my fingers were stinging with cold as I scooped the coarse crystals into my Camelbak.

It’s amazing what a few sips of chilled water and an icy cold pack against your back can do for your demeanor. A few minutes before I had been debating whether I should just skip Throop Peak and Mt. Hawkins, and get down to Little Jimmy Spring ASAP. Now I could do these peaks and continue to enjoy a very warm — but beautiful — day in the San Gabriel Mountains.