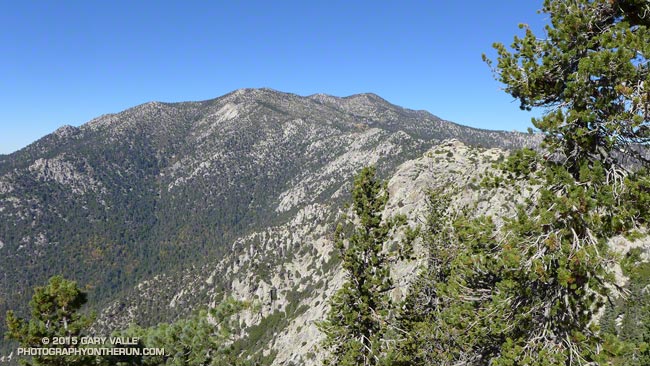 Summits that can be accessed by trail are usually busy places, especially in good weather. That was certainly the case this morning. Each of us had encountered someone we knew on or near San Jacinto’s rocky summit.

It seemed everyone on the peak was doing a different adventure. One hiker mentioned he had run out of food at Wellman Divide. That seemed strange until he explained he was doing the “8000 Meter Challenge” — ascending Baldy, Gorgonio and San Jacinto consecutively in 24 hours. The 8000 meters refers to the (approximate) cumulative gain and loss when doing the three peaks. In round numbers Baldy via the Ski Hut would be about 2375 meters of gain+loss, Gorgonio via Vivian Creek 3350 meters and San Jacinto via the Tram about 1500 meters. If you skip the Tram and do San Jacinto from Idyllwild the gain+loss is about 2680 meters.

An ultrarunning friend that reached the summit shortly after we did was doing Cactus to Clouds to Cactus (C2C2C). This arduous route starts in Palm Springs at an elevation of about 460 feet and climbs all the way to the summit of San Jacinto at about 10,834 feet. Including a couple of short downhills along the way, the total elevation gain is around 10,800 feet. Round trip that works out to about 6600 meters of gain+loss.

Ann, Telma and I were doing a route I’ve enjoyed for many years — ascending San Jacinto from the Tram and then running down to the fire lookout on Tahquitz Peak. The route has excellent running and (on a clear day) hundred-mile vistas. The views of Tahquitz and Suicide Rocks bring to mind many fine days spent with friends at these superb rock climbing areas.

When we got our wilderness permit at the Long Valley Ranger Station the ranger had warned us about 45 mph winds and cold temps on the summit. The strong winds had been forecast to moderate before sunrise and the forecast was spot on. The weather on the summit was near perfect — warm in the sun and cool in the shade with light winds.

A dozen or so hikers were enjoying the warm sun and great weather at the lookout. As always, the fire lookout host was friendly and informative, answering questions about the lookout’s equipment and surrounding landmarks. Want to become a volunteer host? Check this page.

My usual return route from Tahquitz Peak is to go back to Saddle Junction and then follow the Willow Springs Trail to Hidden Lake Divide. With the Willow Springs Trail closed due to the 2013 Mountain Fire it’s necessary to climb back up to Wellman Divide and then descend to the Tram from there. This adds about a mile and 800′ of gain to the usual route. Although we had descended it earlier in the day, the trail going up to Wellman Divide had a different feel to it, and the out and back wasn’t nearly as onerous as I thought it might be.

About an hour after topping out at Wellman Divide we were back at the Long Valley Ranger Station and not long after that on the Tram and headed down the mountain. I smiled as the decades-old recording in the tram car began, “You’ve had a great day…”