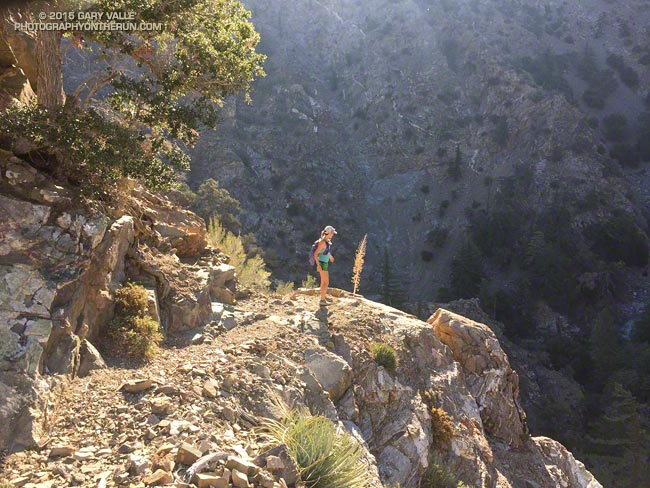 I asked Skye what her watch had for the mileage. Had we gone two miles yet? We were running down the South Fork Trail from Islip Saddle and hoping to do one of my favorite adventure runs in the San Gabriel Mountains. The 23.5 mile loop descends to South Fork Campground,  then climbs to the summit of Mt. Baden-Powell via the Manzanita Trail and PCT; and then continues on the PCT back to Islip Saddle.

A few days before there had been a report on Facebook that the South Fork Trail “was gone” about two miles down from Islip. With the heavy rains we’d seen in July that was certainly a possibility. Even without the rain it was a possibility. The South Fork Trail is under constant bombardment and it is normal for some sections of the trail to be covered by rock slides. I can’t think of an “official” trail in the San Gabriel Mountains with a more primitive character.

The condition of the South Fork Trail wasn’t the only possible problem. Earlier in the week I’d run the Manzanita Trail most of the way to South Fork Campground to be sure that if the South Fork Trail was passable, we would be able to complete the loop. There were two things to check. Was the spring running 1.4 miles from Vincent Gap? It was. And had the heavy July rain washed out the trail in the landslide area above Paradise Springs? It hadn’t. So if we could get to South Fork Campground we were good to go.

As things worked out the condition of South Fork Trail was about the same as it always is. I’ve seen it in better condition and I’ve seen it worse. With care it was passable — but that isn’t a recommendation. It’s the kind of trail some love and others hate.

Once down at South Fork Campground the adventure isn’t over. There are some rock and boulder strewn washes to navigate and there’s the small matter of the nearly continuous 10 mile, 5000′ climb to the top of Mt. Baden-Powell. Having recently completed the Angeles Crest 100 and climbed Mt. Whitney, the tough climb from the South Fork was a piece of cake for Skye. On the other hand, I was very happy to round the final corner and see Baden-Powell’s busy summit come into view. On the way up  we ran into Mt. Disappointment race organizers Gary & Pam Hilliard, getting in a little work after doing the Julian Station Full Moon run the previous weekend. Next year will be Mt. Disappointments’ 10th running.

Between Baden-Powell and Windy Gap the weather was cool and the running comfortable on the PCT. Perhaps because of the heavy July rain the pines and firs seemed to be especially green. In several areas young, healthy trees grew in nursery-like stands amid the bleached trunks of trees burned in the 2002 Curve Fire.

I was just about out of water when we pulled into Little Jimmy Spring, and as always, the water was clear, cold and rejuvenating. Another 2.5 miles and the loop would be done. Although it’s difficult for its length, it’s also very enjoyable. If the weather holds I’ll probably do it again this Fall before Winter settles in.