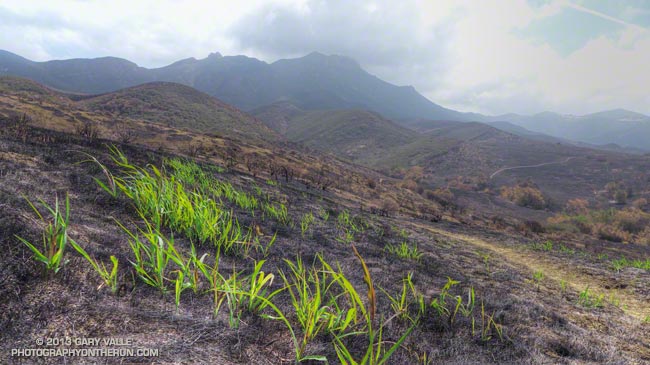 As we rounded a corner on the Old Boney Trail, Ann spotted a deer bounding through a thick, unburned section of brush. Its behavior was unusual — the deer was a few hundred yards away and in heavy cover. We soon saw the reason — a large coyote was trailing the animal and probably had been doing so for time.

We were in the middle of a 25 mile Odyssey through Pt. Mugu State Park, about three weeks after the Springs Fire ravaged much of the park’s 14,000 acres.

Already the process of recovery was underway. Tufts of green were sprouting in many areas. Yucca was beginning to regrow and a few yucca scorched in the fire were blooming. In addition to the deer and coyote described above, over the course of the run we would see another deer; fresh raccoon, bobcat, fox and rodent tracks; a lizard, grasshoppers, many birds, a bee’s nest, and fresh mountain lion scat.

Here is a slideshow of some photos from the run.