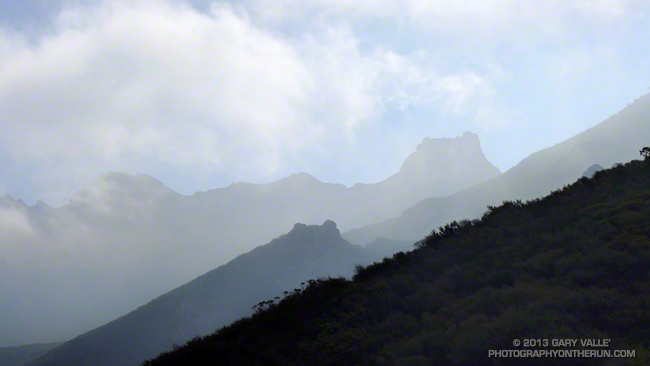 It had only been a week since I’d run here, but it was still easy to see recovery in Pt. Mugu State Park was continuing at a steady pace. Along the Hidden Pond, Sin Nombre and Blue Canyon Trails daubs of brilliant green contrasted sharply with the somber tones of black, gray and white left by the Springs Fire.

Hopefully recovery will continue at this pace. Most Southern California fires occur in Autumn, when there is a higher likelihood of rain in the weeks and months following the fire. The Springs Fire started May 2. A late season storm moved through the area May 6, helping firefighters to control the fire. The weather station at Circle X recorded about 0.4 inch of rain that day, but the area might not see that amount of rain again for 6-7 months.

In the coastal mountains the marine layer is also a source of moisture. Many of the area’s plants supplement rainfall by extracting water from the moist air. For example, the scalloped shape and surface of coast live oak leaves, and their spine-toothed margin promote condensation and collection of water. On a foggy day you’ll sometimes see a rain-like pattern on the ground under a live oak tree.

This morning the marine layer was in, and skies were partly to mostly cloudy. This was a good thing. Yesterday (June 1) Pierce College in Woodland Hills set a new high temperature record for the date of 104degF. With the hot weather and low humidity the Powerhouse Fire near Lake Hughes had tripled in size. The switch to an onshore flow would cool temps, increase the humidity, and help firefighters to control that blaze.

Today, in addition to checking on the progress of recovery, I wanted to check on the condition of Chamberlain Trail. The Chamberlain Trail is part of the Backbone Trail and the descent from Boney Mountain one of the best in the Santa Monica Mountains.

But what you can’t see from the junction is that the fire made a serious run up from Serrano Valley on the south side of Boney Mountain. This can be seen on this Google Earth snapshot of a NASA Landsat Satellite Burn Severity image, but from the image it’s hard to tell if the Chamberlain Trail was overrun or not.

Fortunately only a very short section of the Chamberlain Trail about a 0.4 mile from the Old Boney junction was burned.