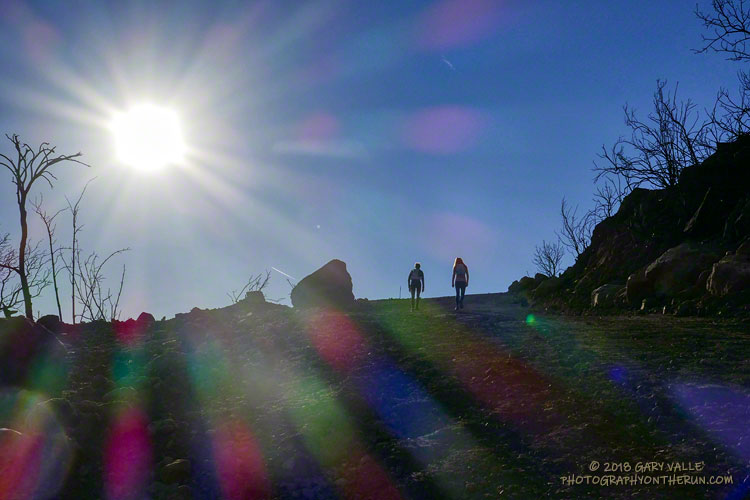 On last Sunday’s run in Malibu Creek State Park, I only had time to check the redwoods and M*A*S*H site and run/hike up about half of the Bulldog climb. Here are a few photos from that run.

Today, Ann, Skye and I did a variation of the Bulldog Loop that starts/ends at the Cistern Trailhead on Mulholland Highway and which covers a large portion of Malibu Creek State Park.

The soil burn severity map included in that report shows that Malibu Creek State Park was one of the most severely burned areas in the Woolsey Fire. This was clearly evident as we ran/hiked along Bulldog Mtwy, Castro Peak Mtwy and Mesa Peak Mtwy. Here is a Google Earth image of the WERT Soil Burn Severity Map with a GPS track of our run added.

As mentioned in last week’s post, there had been some flooding and small debris flows along Crags Road near the M*A*S*H site and at the bottom of Bulldog Mtwy. This week we noted some rockfall along a stretch of Mesa Peak Mtwy that is prone to rockfall. Hazards existed before the fire and hazards exist after the fire.

Bulldog Mtwy and Castro Peak Mtwy had been recently graded and were in decent shape — at least as of December 29. Heavy rain may have changed that assessment.

As badly burned as the park is, there were some things to see on the plus side. The area’s vegetation was taking its first steps toward recovery, with grasses and other annuals, laurel sumac and wild cucumber sprouting. Most of the chaparral along  the Mesa Peak Mtwy segment of the Backbone Trail between  the picnic table at Puerco Mtwy and Tapia Park was left intact.  Most of the Tapia Spur Trail was just outside the fire’s perimeter.

It was was also heartening to see that most of the large oaks along the High Road, west of the parking lot, were OK. Many of the oaks, sycamores, willows and other trees along Crags Road were scorched, but looked like they will recover.