WARNING: The North and Northeast Ridges of Lone Pine Peak are long, complex, alpine climbing routes. Many people climb them without issue, but some are forced to retreat, bivi, or have other difficulties. Some have problems finding the descent routes. Depending on your mountaineering and rock climbing skills, the weather, and your judgement, these climbs can be a fantastic experience or an epic nightmare.

The soaring knife-edge ridges and sweeping granite faces of Lone Pine Peak are compelling features that mountaineers and rock climbers find irresistible. The North Ridge — the right skyline of the peak when viewed from the Owens Valley — is the most popular climbing route on the mountain. It was first climbed in September 1952 by A. C. Lembeck and Ray W. Van Aken. In the 1954 edition of the Climber’s Guide to the High Sierra, it was described as a long class 5 route requiring six pitons.

What’s old is new again, and with the rapid evolution of climbing in the ’70s, the North Ridge was rediscovered. I think I first heard about an “amazing ridge” on Lone Pine Peak out at Stoney Point. There was a group of us that bouldered at Stoney on Tuesday and Thursday and then climbed at Tahquitz, Suicide or JT on weekends. Periodic multi-day trips to the Needles, Yosemite, Tuolumne, and the Sierra rounded out our climbing routine.

Because we were familiar with the approach and descent, climbed the ridge without a rope, usually didn’t have route-finding issues, and ran down most of the Meysan Lakes Trail, we were able to do the North Ridge comfortably in a day. Starting at the Portal 6:00 a.m., we typically made it back in the mid to late afternoon.

Whether it was the perceived difficulty and the strenuous approach — or just random chance — nearly 30 years after the first ascent of the North Ridge, there was no record of the Northeast Ridge having been climbed.

Phil and I did a lot of rock climbing and mountaineering in 1982. That June, along with Rich Grigsby, we climbed Whitney Portal Buttress. Lone Pine Peak was across the canyon, and I think that’s when we decided we had to get on the Northeast Ridge as soon as possible. We scouted the approach and waited for the snow higher on the ridge to melt.

A month later (July 10) we parked in the pinon pines and sagebrush at the end of an obscure dirt road at the base of the peak, pulled out our packs, put on some sunscreen, and set off to climb the Northeast Ridge.

To give ourselves the most daylight for dealing with possible problems on the technical part of the ridge, we decided to hike the non-technical section in the afternoon, then bivi and start climbing early the next morning. One downside of this decision was that it was July, and we did the hike during the hottest part of the day.

To save weight we carried a minimum of “just in case” climbing gear. We took the good half of an 8 mm rope that had been damaged. We packed “swami belts” instead of climbing harnesses. The webbing was much lighter and more compact, and might come in handy if we had a problem. We took a few slings and maybe a nut or two. In a pinch we figured we could use natural protection or chock some appropriately shaped rocks. We hiked and climbed in approach shoes. Phil’s shoes were Nike Lava Domes. I don’t recall what shoes I used, but I do remember that the soles started to delaminate during the climb.

We each took a couple bottles of water. We thought there was a slight chance of finding an accessible patch of snow higher on the route, but that didn’t happen. There was a little snow in the gully between the Northeast and North Ridges.

We both carried (film) cameras. My camera (and maybe Phil’s) was a Pentax ME. At that time, I was shooting a lot of B/W film – rolling my own cartridges from a bulk roll of fine-grained 2415 Tech Pan film and developing it myself.

Our bivi spot was just below where the interesting climbing began, at an elevation of about 9400′. It had a great view of Bastille Buttress. We didn’t have sleeping bags, but with the warm weather slept well and started climbing shortly after sunrise.

The climb could not have gone more smoothly. It was a granite playground of ramps, towers, and feldspar dikes and crystals. Everything that looked like it might be a problem had a solution. My notes regarding the route were pretty sparse:

“Ramp on right of first major tower. Followed a dike on another. Traverse on shattered ledge/weakness on final headwall.”

We never used the rope or any of the climbing gear. There were a few bouldering-type moves, but overall the climbing was surprisingly straightforward. The rock quality was generally good. The granite is peppered with large feldspar phenocrysts. These can make great holds, but can also pop unexpectedly.

Judging from the sun angle and shadows, it was around noon when I took this last photo high on the ridge. That would have put us on top about 1:00 p.m. It may have been earlier. Low on water, we briefly visited Lone Pine Peak’s summit, and then hiked south to the usual descent chute on the west side of the peak.

Hurrying down the scree, we thirstily drank from the first little stream we encountered. After rinsing off the granite grime at a nearby tarn, we found the Meysan Lakes Trail, and headed back to the Portal. 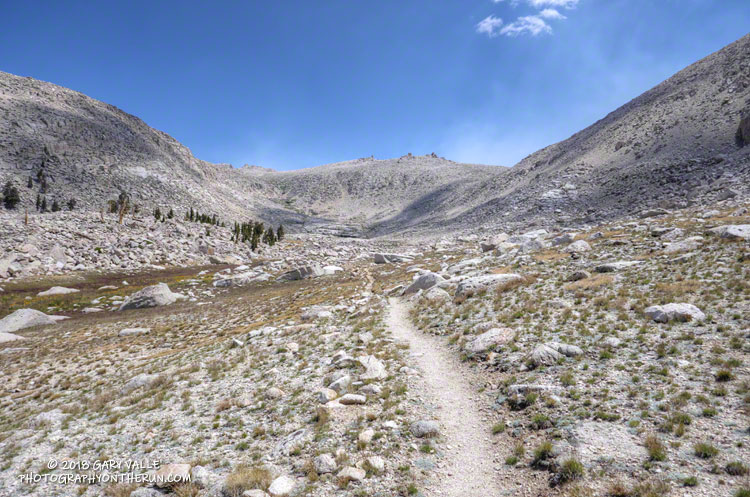