For many that enjoy the outdoors, there is an insatiable desire to go where we have not been, learn what we do not know, and discover what we have not experienced.

Each time I’ve done the out and back trail run from Mt. Pinos to Mt. Abel, I’ve been curious about the Mesa Spring Trail. The trail leaves the Tumamait Trail at Puerto del Suelo, a saddle about 0.6 mile east of Mt. Abel Road, and descends to a campsite at a spring on the margin of San Emigdio Mesa. The mesa is the large alluvial fan shown on this Google Terrain Map overview.

The Mesa Spring Trail is part of an old trail shown on the USGS 1903 Mt. Pinos topo map. The old trail was part of a route that connected the Cuyama River to the historic El Camino Viejo a Los Ángeles. It followed Dry Canyon, went over Puerto del Suelo, and to the valley that is now the Pine Mountain Club. Like so many trails, it must have evolved from a hunting and trade route.

The Mesa Spring Trail is usually accessed from the West Tumamait Trailhead on Mt. Abel Road. But it occurred to me that starting at the East Tumamait Trailhead on Mt. Pinos might be an enjoyable way to do a longer out and back run. The Mesa Spring Trail looked like it might be similar to the North Fork Trail — a little less used and a bit more remote.

I left the Chula Vista parking area a little before 7:00 a.m. and started chugging up the road to the East Tumamait Trailhead at the Mt. Pinos Condor Observation Site. I planned to skip the usual side trips to Sawmill and Grouse. The spring was at a much lower elevation, and I wanted to get there before the temperature sizzled.

Once on the Vincent Tumamait Trail, it took a little over an hour to reach the top of the Mesa Spring Trail. The junction is marked with a new sign and tree branches on the ground. It is about 5.7 miles from the Mt. Pinos parking area.

The first couple of miles down from the junction, the trail more or less follows the drainage. About 10 minutes from the junction, a large pine tree had fallen and completely blocked the trail. I worked around the right (west) side of the tree, where some orange fence posts had been placed. A few minutes beyond the collapsed tree, the trail wandered around the right side of a pretty meadow and then back to the “V” of the dry stream.

For the next mile or so, the trail followed a typical down-canyon route. On the way down, there were some spots where I stopped, turned around, and made a mental note of what the trail did. It wasn’t so much a matter of getting lost, as it was not wasting time at an ambiguous spot on the way back.

About 2.3 miles down from the saddle, the trail climbed out of the canyon, taking a counterintuitive turn to the right. After reaching a ridgeline, the trail turned back left and continued downhill. But its wanderings were not over. The trail was working across the gullies at the top of the San Emigdio Mesa. It went up, down, and around, but eventually did go to Mesa Spring. There were “ducks” marking the route, but it really helped to have looked at a map and have a general idea of where the trail would go.

Mesa Spring is a pretty green spot in a group of pinyon pines. As I neared the spring, I saw some coyote-like ears bobbing through the sagebrush, and not long after that, a deer bounded through the trees. At the spring, a squirrel leaped from the edge of the water-filled cistern to a nearby tree and various birds flittered in the pines. I heard a trickle of water near the cistern’s base but planned to get water at Sheep Camp, later in the run.

Although the Mesa Spring Trail continues down the mesa, the spring was my turnaround point. I had waited for a day when the weather was better for this run. A weak low-pressure trough moving through to the north had stirred up a little wind and taken the edge off the recent heatwave. It had been cool on the crest, but at 6000′ it was already hot in the sun. It was time to get moving, and in a few minutes, I was retracing my steps and headed back to Mt. Pinos.

With a stop at Sheep Camp, the run & hike worked out to about 20 miles, with an elevation gain of around 4700′. Here are a few photos taken along the way, and an interactive 3D view of the trail run.

Some related posts: Mt. Pinos to Mt. Abel Out & Back – Plus Sawmill Mountain, Grouse Mountain and Sheep Camp, Up, Down and Around on Mt. Pinos’ Tumamait and North Fork Trails 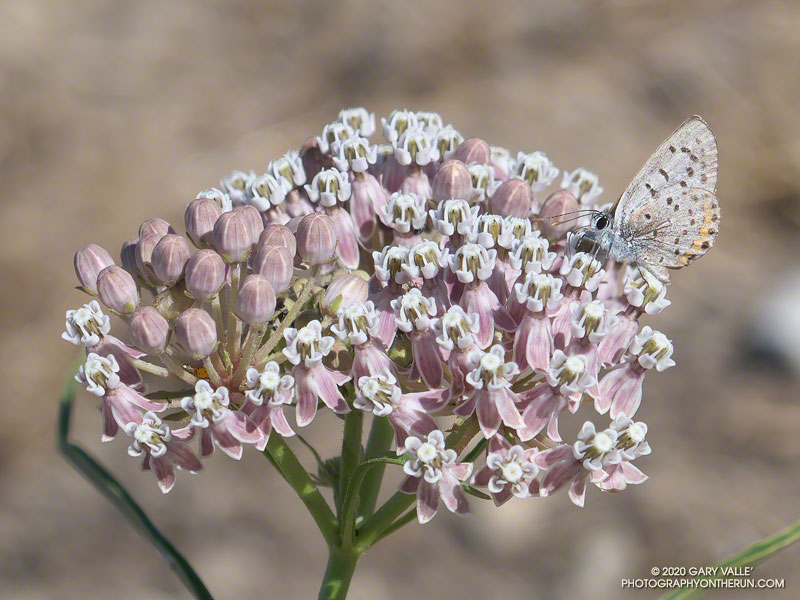 An Acmon Blue butterfly on narrow-leaved milkweed on Lasky Mesa.

You know what they say about making assumptions. Did the Three Points loop around Mt. Waterman today (July 25), and assumed that water would be available at Buckhorn Campground. In a normal summer that would be a reasonable assumption, but this has been anything but a normal summer.

Running down through the campground, I thought it was strange that many of the spaces were empty. Following the signs that said, “Day Use Parking,” and then “Burkhart Trail,” I stopped at a spigot across from some restrooms.

Later, I talked to a ranger and learned that the campground had just reopened on Friday! He said routine tests on the water system had to be completed before the water could be deemed potable.

So I had a choice to make. I was doing the loop counterclockwise, which put Buckhorn at about mile 9 of a 20-mile loop. The second half of the loop — on the PCT — can bake on a hot day, with the climb out of Cooper Canyon being especially blistering.

So far, the run had gone well. The Mt. Waterman Trail between Three Points and the turn off to Twin Peaks had been in excellent shape. No trees had blocked the trail, and the wildflowers and ferns at Waterman Meadow had been extraordinary. Like last year, a rejuvenated spring about 0.5 mile west of the Twin Peaks junction had water. (Not aware of the situation at Buckhorn, I didn’t top off my water.)

Beyond the Twin Peaks junction, there were some toppled trees. These were probably blown down by the same Winter storms that broke and toppled trees along the crest between Throop Peak and Mt. Baden-Powell, and between West Fork and Mt. Wilson. A few of the trees had fallen across the trail, but none were a problem.

As usual, the run down the Mt. Waterman Trail to Highway 2 was excellent. A lot of people were enjoying the hike to the peak, but no more than is typical for that trail in the summertime.

Which brings me back to Buckhorn and my water problem. I could have shortcut the loop by skipping Cooper Canyon and running directly to Cloudburst Summit on Highway 2. That would have shortened the loop by 5 miles. But the day wasn’t super-hot, and there were several places where water could be used for cooling — even if I couldn’t drink it.

Reconfirming how much water I had left, I squeezed the Camelbak(TM) in my pack, and then started running down the Burkhart Trail into Cooper Canyon.

By maintaining a comfortable pace, and using seeps for cooling, my water lasted until I was within sight of the Three Points parking lot. This probably wouldn’t have been the case on a hot day.

Here are some photos taken along the way, and a Cesium interactive 3D view of the route.

While doing the Bulldog Loop earlier this year, I encountered an enthusiastic hiker who commented, “Aren’t the wildflowers amazing?”

He added, “There are so many, uh… What’s it called? You know, the one that smells like maple syrup.”

“Do you mean Everlasting?” I asked.

That’s what people remember about California Everlasting — the leaves smell like maple syrup.

The somewhat nondescript plant is especially abundant this year.

As suggested by its name, California Everlasting (Pseudognaphalium californicum) can be found along trails in Southern California chaparral and coastal sage-scrub just about any month of the year.

The plant looks like it is blooming in the title photo, but each “petal” is a botanical structure called a phyllary. The phyllaries form a protective covering around a disc of tiny flowers as they develop. Here is a closer view.

The plant dries out in the Summer, but the flower-like structures often remain – an everlasting dried flower arrangement.

The photos are from this morning’s run to Calabasas Peak on the Secret Trail.

After climbing the western ridge route on Boney Mountain and scrambling over Tri Peaks, I was trying to run down the Chamberlain segment of the Backbone Trail. Usually one of my favorite downhills, the trail was so glutted with the flower stalks of bleeding heart, it made running difficult. Here’s a video snapshot of one short section of trail.

Sticky snapdragon is another fire follower that has become especially prevalent this Spring. It is truly sticky, with rose-purple-colored flowers along a long stalk.

Some related posts: Fire Followers Along the Backbone Trail (May 2019); Wildflowers, a Waterfall, and Recovering from the Woolsey Fire (March 2019); Boney Mountain and Pt. Mugu State Park (December 2018)