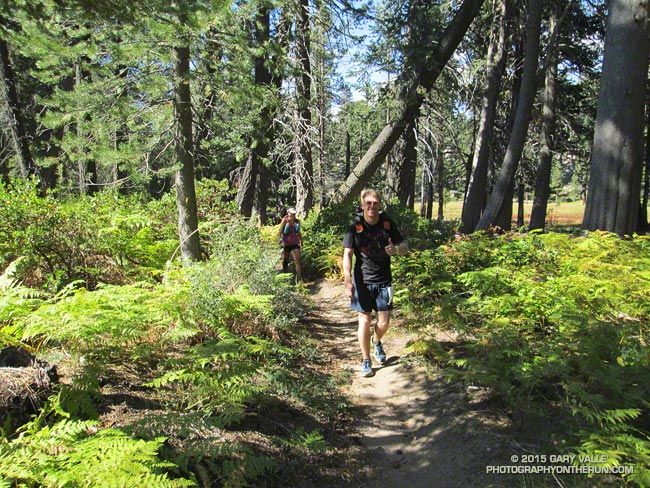 Dazzlingly bright and a day from full, the moon rose above the trees along the Snow Summit skyline. Ahead of the moon, Pegasus flew effortlessly across the eastern sky. I asked to borrow his wings, but in response heard only our footfalls and the wind in the pines.

We were on the Skyline Trail above Big Bear Lake and about 44 miles into the Kodiak 50 mile — one of four ultra-length running races organized by Matt Smith and crew for this Friday and Saturday.

The Kodiak 100 milers had started their circuit of Big Bear Lake at noon yesterday, and after running through the night, the fastest of the fast had finished the course this morning!

The Front 50K runners started on the heels of the 100 milers and ran the first 31 miles of the course — including the ascent of 10,000′ Sugarloaf Mountain. They finished yesterday evening at the Wildhorse aid station. Runners doing the Back 50K — the last 31 miles of the 100 mile course — started at Snow Valley at 8:30 this morning and most had finished by mid-afternoon.

We had started the 50 mile before sunrise at the Gray’s Peak trailhead, near Fawnskin, on the north shore of Big Bear Lake. Though warmer than normal, the temperature before sunrise was still in the 40s, and many shorts-clad runners huddled around the wheel wells of running cars trying to keep warm before the 6:00 am start.

This year’s Kodiak 50 mile course was the best yet, with nearly ten more miles of singletrack trail than in 2014. The race started on the Gray’s Peak Trail and about five of the first seven miles were on singletrack. Though burned in the 2007 Butler 2 Fire, the area along Snowslide road was growing and green, and the running pleasant. With this summer’s heavy rains there were even a couple of running springs. There are few “small” hills on the way to Snow Valley, but the first 19 miles are really just a warmup for the difficulties ahead.

Things start to get interesting at Snow Valley. Following a cross-country jaunt across a snow play area, and a jog along a dirt road, you come to the end of the earth. At least it looks like that. An exposed, steep, technical, 2200′ 2.6 mile descent down the Camp Creek Trail leads to the Bear Creek water station. I ran this segment with Jim,  a 100-miler from Chicago. It’s a completely different experience and challenge for those doing the hundred. At the start of the descent into Bear Canyon the runners doing the Back 50K have run about a mile and the 50 milers about twenty. The hundred milers have run over 72 miles!

In the belly of the beast at the bottom of the canyon is the Bear Creek water/aid station. The station is key and there is no easy access. This year ultrarunners Dominic Grossman, Katie DeSplinter & Friends backpacked into the canyon and took care of runners in fine style! (See the photos on the Kodiak Facebook page!)

Beyond Bear Creek is the toughest, and one of the most spectacular, sections of the Kodiak course — the 3000′, seven mile climb up the Siberia Creek Trail to the Champion Lodgepole aid station. Runners unfamiliar with the course tend to underestimate its length, difficulty and water requirements. Because of the warm temps this year — 83°F at the Converse RAWS — I expected it to be hot on this climb; but the longer shadows of fall and the chaparral and forest cover kept the temperature reasonable. Once you reach the canyon rim there is about a mile of idyllic running on a fern-line trail, through an old-growth forest to the Champion aid station.

After the Champion aid station the course follows Bluff Lake Road (2N10) about 1.3 miles and picks up the Skyline Trail on the right. This year’s course added the final few miles of this epic trail between Grandview and the backside of Snow Summit, increasing the total distance run on the the trail to over 8 miles. The views along “Skyline Divide” are superb and include Sugarloaf Mountain, the many 10,000’+ peaks along San Bernardino Peak  Divide, and 11,500′ San Gorgonio Mountain — the highest peak in Southern California.

More than one tired runner may have wondered what the trail designers were thinking when they built the Skyline Trail. Why are there so many twists and turns and ups and downs? The trail was built within a 20-300 foot wide firebreak that was cleared by the Forest Service following the Old Fire. By staying with the firebreak, there were fewer environmental considerations and the trail could be built now, rather than later. According to the Skyline Trail Guide on the Big Bear Valley Trails Foundation web site the trail designers couldn’t contour along the land as much as they would have liked, and were “forced up and down the many short, tough hills of the ridgeline.” Although designed to be multi-use, there is a definite mountain bike flavor to the trail.

The Kodiak course and races have a character all their own. Don’t expect a lot of hand-holding. The course the past three years has been adequately marked — if the markers haven’t been vandalized — but it isn’t one of those ultras with a “confidence” marker every 100 yards. It helps me to become familiar with the tracks of runners that are ahead of me, and use those as a kind of marker.

How much of an effect does the altitude have? The increase in your race time can be estimated using Jack Daniel’s VDOT Running Calculator. If you normally run a similar 50 mile course near sea level in 12 hours, and are fully acclimatized, at an elevation of 7200′ you can expect to add around 42 minutes to your time. According to the Daniel’s book, if you are unacclimatized, the difference can be as much as double this amount. That would increase the time to 13:24. The projected increase in time at an altitude of 7400′ for a 24 hour 100 mile would be 1:27 for the acclimatized runner and up to 2:54 for the unacclimatized runner.

It had been dark for a while now and I thought I heard a generator running in the distance. Was it (finally) the Coyote aid station? Most of the 100 and 50 mile runners had already finished, and we were among a handful of runners that were enjoying the moon and stars from the Skyline Trail. I’d been running with “Thelma without the h” on and off since the start of the Siberia climb, and it really helped to have a running partner. For a long stretch we had also run with Steve, a 22 year old Marine. He said his buddies wonder why he would want to use his valuable time off and pay good money to do a 50 mile run!

It’s a hard thing to explain. Like climbing a mountain, or other challenge or adventure, there is no one answer. Running an ultra is part physical, part mental, part social and part inexplicable. How that mix is weighted varies from person to person and time to time. Whatever the mix, or the time, there is a totality and intensity in the experience that is difficult to replicate.

Many thanks to R.D. Matt Smith and all of the event staff, volunteers, sponsors and runners! For all the results, and more photos and stories, check out the Kodiak web site and Facebook page.

Note: Mileages, elevations and elevation gains are approximate and based on GPS tracks from the 2015 50 mile and 100 mile races. Click thumbnail images for a larger image and more info.