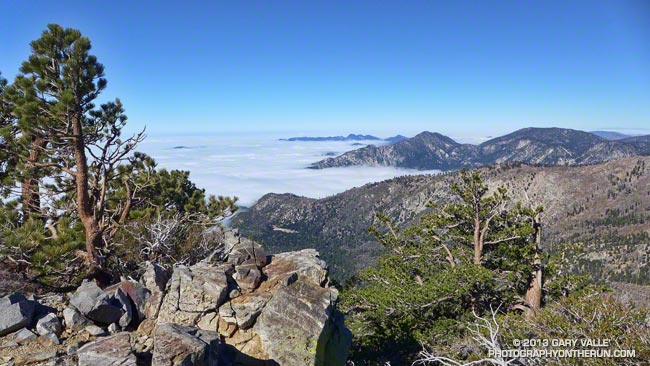 The snow was rock hard and covered with lodgepole pine needles and other debris. Having experience climbing snow and ice I can usually deal with a little early season snow, but I could see no way to safely cross this patch. The snow was steep and icy, the runout long and the risk high. My usual tricks for crossing short stretches of snow were not going to work.

Snowfall had been sporadic in Southern California over the Winter and this was the earliest in the Spring I had tried to do the out and back from Islip Saddle to Mt. Baden-Powell. I had thought there might be some patchy snow on the north-facing slopes at the higher elevations, but I hadn’t expected it to be an issue.

Borrowing from river paddling philosophy, you never run (or hike, or ride) the same trail twice. I knew it was going to be an interesting day when a bighorn sheep darted from the trailhead at the beginning of the run. I’d followed bighorn tracks from Islip Saddle up the PCT for about a quarter mile to an overlook of Hwy 39 and Twin Peaks.

The view from the overlook had been spectacular. Marine layer stratus filled the canyon, nearly immersing Triplet Rocks on Twin Peak’s elongated east ridge. The stratus was evidence of a strong onshore flow, but above Islip Saddle a strong — and cold — wind was blowing almost directly out of the north. It had been cold enough that I pulled on my extra sleeves, ultralight shell and light gloves.

The wind was unrelenting and seemed to work its way around every corner and into every canyon. At Windy Gap and the other wind gaps along the crest the wind was funneled and accelerated, and I wondered if this would be the day I would see or hear one of the huge ghost trees from the Curve Fire crash to the ground.

At times I go where my camera takes me, and about a half-mile west of Mt. Hawkins it took me off the PCT and onto the Hawkins Ridge Trail. There are three peaks along this ridge —  Middle Hawkins, Sadie Hawkins and South Mt. Hawkins. It had been years since I’d done these peaks, and today it looked like there might be some good views from the ridge.

The Hawkins Ridge Trail was warm and mostly sheltered from the wind and I continued down the trail a little further than necessary before leaving it and scrambling up to the summit of Middle Hawkins. Warmed from the steep climb I had returned to the PCT and continued toward Baden-Powell.

Near the junction of the PCT and Dawson Saddle Trail there had been patches of snow mixed in with the chinquapin and limber pines, but it hadn’t been until the PCT skirted north around Mt. Burnham that the trail was blocked by snow. I abandoned the attempt to cross the icy patch and headed up the steep slopes of Mt. Burnham to the crest.

It was still cold and windy when I reached the summit of Mt. Baden-Powell, but a sparkling day with Mt. Baldy to the southeast across Vincent Gulch, San Jacinto Peak and San Gorgonio area peaks in the distance to the southeast, the Sierra to the north, and miles of stratus to the south. After spending a few minutes on the summit I retraced my steps back down the crest and the PCT to Islip Saddle, making the requisite stop at Little Jimmy Springs along the way.