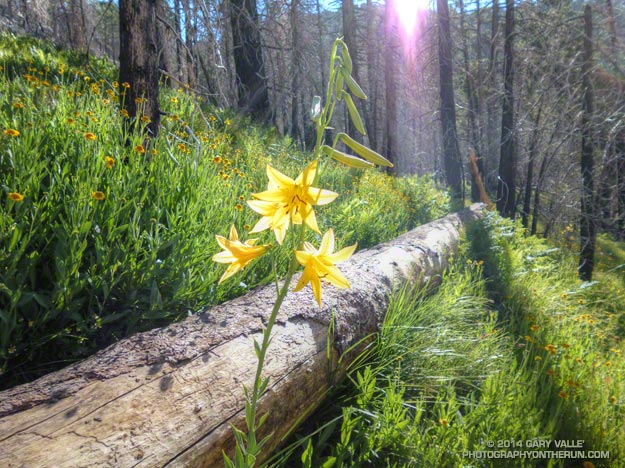 The bright yellow lemon lilies marked the trail. I hopped up on the log, followed it to it’s end, and stepped off. An ill-defined path through thick ferns gradually became more distinct and after a few yards became easier to follow.

The Mt. Waterman Trail is less used than the major trails in the area, such as the PCT and Silver Moccasin Trail.  While it has seen some post-fire maintenance, it has more of the character of a “use trail” — as it did before the Station Fire. The trail is indistinct at times, winding its way around fallen trees and simply defining its route through use.

Some sections of the Mt. Waterman Trail near Three Points were severely burned. Higher up the mountain the fire made long runs up parallel ravines and ridges, creating a patchwork of burned understory and trees. The chaparral in the severely-burned areas appears to be recovering at a more or less normal rate. Of course the trees will take longer to grow, and it was great to see some pine seedlings and incense cedar seedlings have sprouted in the burn area.

The loop joined the AC100 course at Buckhorn Campground, descending the Burkhart Trail and then following the PCT up Cooper Canyon to Cloudburst Summit. From here it is nearly all downhill to Three Points.