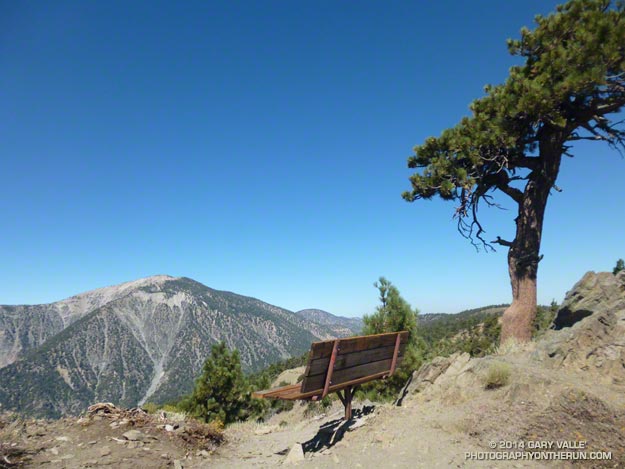 Sitting on the bench at Inspiration Point, I gazed across mile deep Vincent Gulch to the towering northeast face of Mt. Baden-Powell. My eye traced the peak’s right-hand skyline from near Vincent Gap up, up and to a small step just below Baden-Powell’s summit. At that small step, marked by a gnarled and ancient Limber pine, was the 9,225′ high point of the Angeles Crest 100 course.

During this year’s AC100 training runs a question that has inevitable come up is “How many times have your run AC?” When I’ve responded that the AC100 would be my first attempt at running 100 miles the reaction has often been one of polite surprise and concern. Why at age 66 — or any age — would I choose such a challenging event as my first 100?

The answer is a simple one. My goal isn’t to run a 100 miles. If that were the goal I’m pretty sure I could pick an event with a less demanding course and click off the miles. My goal is to become fully enveloped in the experience of running 100 miles through a mountain range that I have enjoyed for more than 40 years.

Over that time I’ve run, hiked, climbed, skied, and kayaked the San Gabriel Mountains. I’ve soared above its peaks in a hang glider. I’ve worked on its trails. On every visit I try to learn more about its flora, fauna, geology and weather. Photography from its peaks and within its canyons is a passion.

This year my dream of running the AC100 ended at Newcomb Saddle. I could not have had better conditions for running the race or a better crew or pacers. Quads and mind blown, I felt I couldn’t continue. After sleeping an hour at Newcomb, and with the help of my pacer, I was able to hobble down to Chantry Flat.

It is one thing to know something intellectually and quite another to know it from personal experience. It was amazing and humbling. I learned a lot, and look forward to participating in the event again next year.

Many thanks to Hal Winton, Ken Hamada and everyone that helped to make the event happen. And a special thanks to the aid station personnel at Newcomb Saddle that did their best to get me moving before the cutoff!