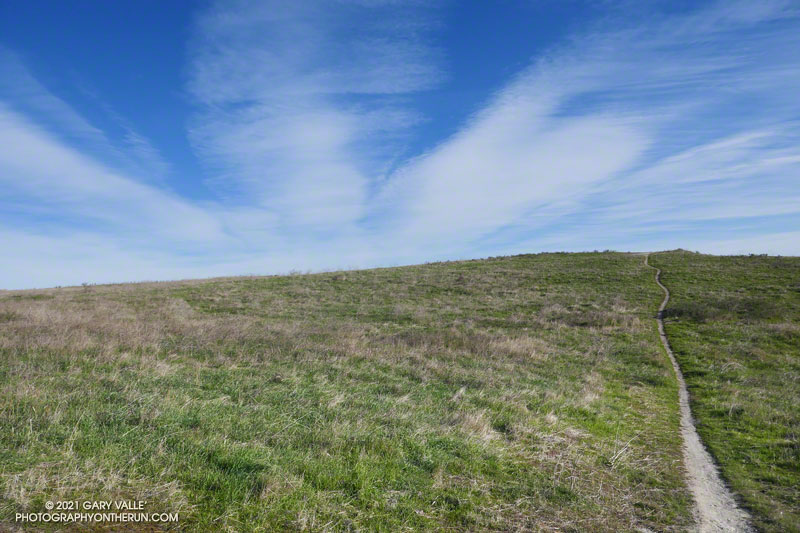 It looks like Downtown Los Angeles (USC) is going to end February — one of the wettest months of the rain year — with only a trace of rain. The current rain year total for Los Angeles is 4.39 inches, which is about 39% of the normal total for this date.

It’s been one of those years where missed rain opportunities have often turned into strong offshore wind events. This chart from MesoWest shows the wind speed and direction for the past 30 days for the Malibu Hills RAWS. Since mid February there has been five wind events with sustained wind speeds over 30 mph and gusts over 50 mph.

Current forecasts suggest Los Angeles will see at least some rain in March, with the first chance around midweek. We’ll see!

Related post: A Dry and Dusty Start to the Los Angeles Rain Year 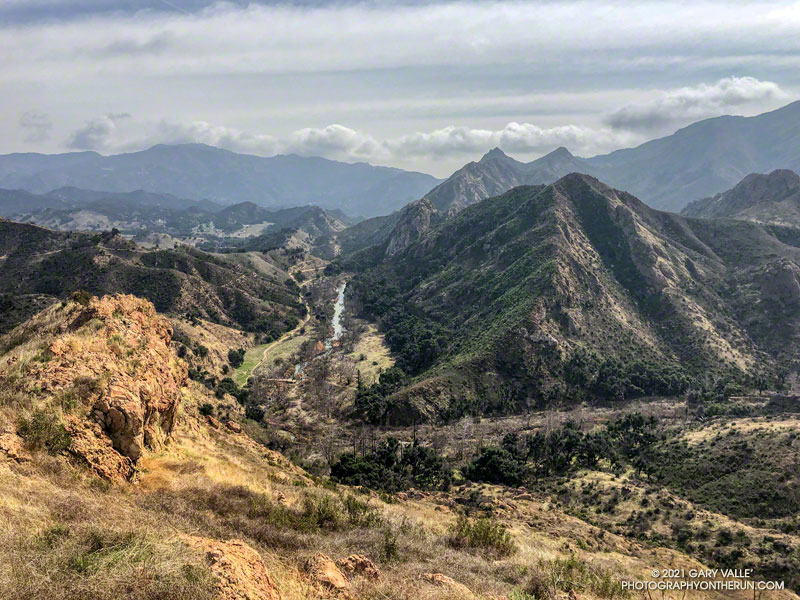 This morning’s running plan morphed from doing a loop I’ve done many times, to exploring a trail I hadn’t done, and hiking along a ridge to the top of a butte with a unique view of Malibu Creek State Park.

I was running west on the Deer leg Trail, in the Reagan ranch area, when I stumbled onto the Lake Vista Trail. What’s this? I usually run the Deer Leg Trail in the opposite direction, and for some reason had not previously noticed this trail. Any trail with “Vista” in the name is worth exploring, so there was little choice but to turn onto the trail and see where it led.

As it climbed toward an obvious ridgeline, the enjoyable single-track trail wound in and out of various small canyons. About 0.7 mile from the Deer Leg Trail junction, the Lake Vista Trail topped out at a very pretty overlook of Malibu Lake. My watch showed the mileage to the overlook from the Cistern Trailhead was about 2 miles.

From the overlook an unofficial “use” trail works back east along a broad ridge to the top of a butte that has a unique view of Malibu Creek, Century Lake and Goat Buttes. Because of the area’s volcanic origins, the use trail is rough and rocky in places, and the trail is not always obvious. It’s a little under a half-mile from the overlook to the summit of the butte. Even though it was Winter, I kept a wary eye and ear out for rattlesnakes.

Once back at the overlook, I made a loop of it by descending the Lake Vista Trail to the Reagan Ranch parking area, and then working back east on the Yearling and Lookout Trails to the Cistern Trail. Here’s an interactive, 3D terrain view of my GPS track of the run and hike. 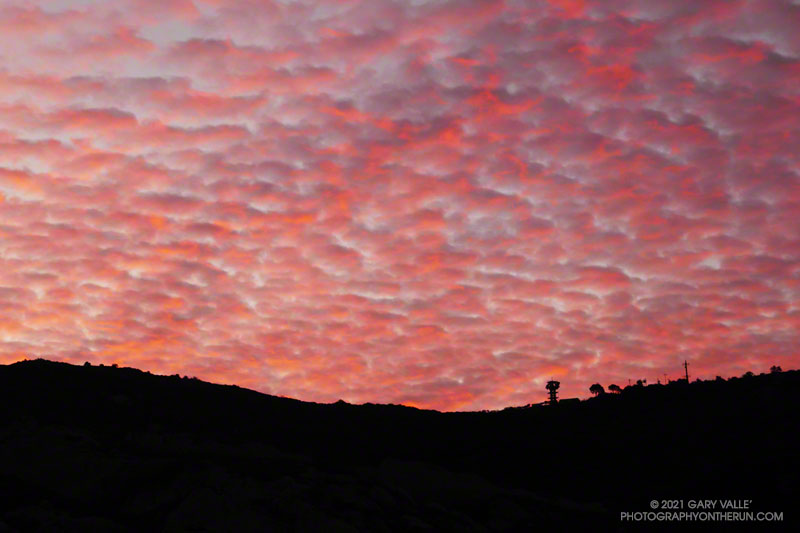 I was running up Calabasas Peak Mtwy fire road trying to get a better view of the eastern sky, but the view in that direction was blocked by a steep hillside. The road turned to the northeast up ahead, and I hoped the best moments of a rapidly-evolving sunrise would not be lost.

A couple of breathless minutes later, I rounded a corner and was rewarded with an unobstructed view of a vivid, pink-red-orange mackerel sky. Focusing on the ridgeline near Topanga tower, I shot several sets of bracketed photos.

Excited by the sunrise, I continued up the fire road, scanning my surroundings for another photo. My eye settled on the gibbous moon. High in the sky, it’s bright face was subdued by a thin veil of pinkish-gray cloud. I’d previously experimented with handheld shots of the Moon using my running camera — a Lumix ZS100. Zooming to an equivalent focal length of about 250mm, I held my breath, steadied the camera the best I could, and took a few shots. Here’s one of the images — cropped and sharpened — with enough detail to see craters, maria, and some other lunar features.

At the bottom of Topanga Lookout Ridge there were several bigberry manzanita bushes covered with flowers. A hummingbird was up before sunrise, buzzing about the blossoms, busily drinking the precious nectar. Although it had rained a couple days before, this rain year there had been little rainfall, and a corresponding scarcity of early season wildflowers.

As I climbed higher on the ridge, the mountains northwest of Los Angeles came into view, white with snow from the recent storm. The snow-covered peaks are south of Mt. Pinos and Frazier Mountain, in the area of San Raphael Peak, McDonald Peak, Sewart Mountain and Snowy Peak.

Like snow on a mountain, there is a purity in the form and appearance of clouds. When a long, dark streak appeared across a layer of high clouds, it was hard to miss. In this case, the dark line appears to be the shadow of a contrail of a jet flying above the clouds. At the time LAX was reporting scattered clouds at 19,000′ and 23,000′, with a broken layer of clouds at 28,000′. Given the height of the clouds and orientation of the contrail, it may have been from a flight from San Diego to San Francisco.

Topping out on the ridge, I smiled when I saw the masked couple dancing on the Lookout, and continued west toward Saddle Peak.