The Hidden Pond – Old Boney Loop is a variation of the XTERRA Boney Mountain Trail Run 21K course. The route is about a half-mile longer and has a couple hundred feet more of elevation gain, but all the key trails are the same. It starts/ends at the Wendy Drive & Potrero Road Trailhead.

Here is an interactive 3D terrain view of the Hidden Pond – Old Boney Loop and a few photos taken along the way. 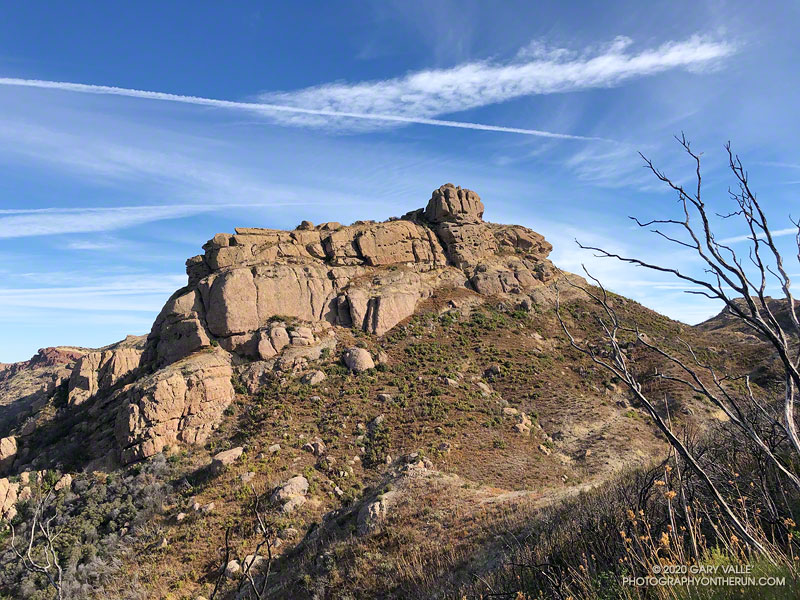 Every time I’ve run the Chamberlain segment of the Backbone Trail, I’ve looked at the intriguing rock formation near the top of the trail and wanted to climb it. Looking a bit like an aircraft carrier that’s run aground on a mountain ridge, it’s one of the most prominent peaks along Boney Mountain’s western escarpment. Named “Boney Bluff” by rock climbers, several sport climbing routes were established on the southeast side of the peak in the early 2000s.

Located just northwest of the junction of the West Tri Peaks Trail and the Backbone Trail, the peak is visible from many points in Pt. Mugu State Park. According to lidar-based 1-meter resolution 3DEP data, its elevation is 2985′, which is slightly higher than the 3DEP elevation of nearby Exchange Peak.

Boney Bluff is one of many small peaks and rock formations that are found across the Boney Mountain plateau. Comprised of a fused mishmash of volcanic breccia, the rock quality of these formations ranges from very good to quite bad. Seemingly solid handholds or footholds can break, and because of the way the rock erodes, low-angle sections are often littered with granular rocks that can be very slippery.

Having climbed the Western Ridge on Boney Mountain, I approached Boney Bluff from the north, via the Tri Peaks Trail. My route climbed a slope to the east side of the peak, then traversed right to the base of a jumbled face with several oddly eroded ledges. A short, steep crack and grassy ramp provided access to the ledges above. NOTE: There may be a better way to climb the peak. I was trying to do a relatively direct route and avoid bushwhacking. The route is somewhat manky, but worked for me.

The high point of the peak is on top of a summit block that caps the “island of the carrier.” Many of the formations on Boney Mountain have summit blocks, and these are often the most difficult part of the climb. Rule #1 involving summit blocks: Don’t climb up anything you can’t 100% for sure climb down! This one looked like it might be tricky, but with careful route-finding was pretty straightforward.

Because Boney Bluff is perched on the edge of the Boney Mountain plateau, on a clear day there are outstanding panoramic views of Pt. Mugu State Park and the Boney Mountain area from its summit. Today, the visibility was excellent and Mt. Baldy was visible, 75 miles to the east.

The resolution of the 3DEP Elevation Data is very impressive. While checking the elevation of Boney Bluff, I also noted the 3DEP elevation of several other peaks in the Boney Mountain area. For more info about 3DEP see this U.S.G.S. website.

The Overlook Fire Road in Pt. Mugu State Park was nearly empty. I’d seen only two hikers between the top of the Fireline Trail and the top of the Wood Canyon Vista Trail. Maybe it was the wind. There had been 20-25 mph wind gusts much of the morning. Along the ridgelines, the gusts were even stronger.

According to the NPS website, the Santa Monica Mountains National Recreation Area is the world’s largest urban national park. Wildlife in the Park is affected by issues resulting from the proximity of urban and wild areas. Among the problems are poisoning from anticoagulant rodenticides, limited genetic diversity, and vehicular deaths. Only by studying Park wildlife can we better understand and manage these and other issues.

Because water is usually available at several spots in Sycamore Canyon, it’s a great place to do a self-supported ultra-length trail run.

So far, today’s run had taken me from Wendy Drive in Newbury Park to Serrano Valley via the Old Boney Trail. I’d circled past the old ranch in Serrano Valley and then descended the Serrano Canyon Trail to Sycamore Canyon. A short jog south in Sycamore Canyon put me at the bottom of the Fireline Trail, which I’d followed up to the Overlook fire road.

Next up was a scenic loop in La Jolla Valley. After that, I would work my way back to the Upper Sycamore Trail via Sycamore Canyon. From there, it would only be a few miles back to the Wendy Drive Trailhead.

The Santa Mountain Mountains Trails Council has been hard at work. Even though they can’t currently accept volunteer assistance, it looked like the Old Boney, Serrano Canyon, and Upper Sycamore Trails had been recently maintained.

Above are thumbnails of a few photos from a 20-mile out and back trail run to Mugu Peak from the Wendy Drive Trailhead. The run was on October 17, 2020. Click on an image for a larger photo and more information.

There are several ways to get to Mugu Peak from the Wendy Drive Trailhead on Potrero Road. When I do this run I’m usually looking to do a longer, faster-paced run without a huge amount of elevation gain. That translates to running down Big Sycamore Canyon to Wood Ranch Road and then either running up the Backbone Trail or Hell Hill to the “hub,” and from there to La Jolla Valley and Mugu Peak.

Here are maps of Rancho Sierra Vista/Satwiwa and Pt. Mugu State Park from the NPS Santa Monica Mountains web site. Also see the Pt. Mugu State Park maps on VenturaCountyTrails.org. Please note that as of October 2020 the lower half of the La Jolla Canyon Trail is still closed.

One of Southern California Edison’s remote weather stations is in Sycamore Canyon, near the Danielson ranch house and multi-use area. 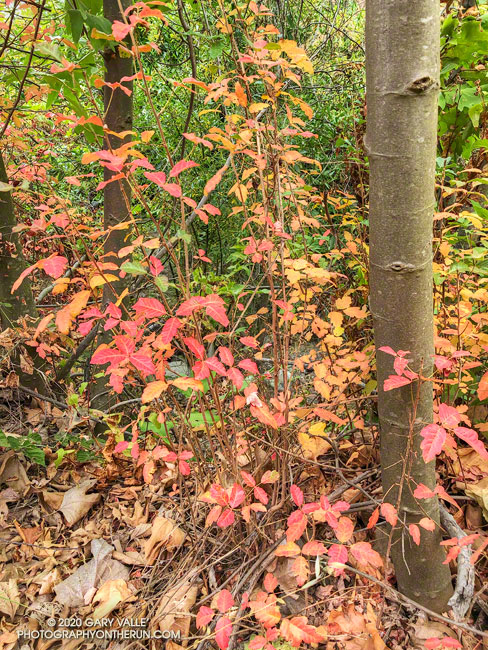 The soft-hued reds and yellows of these changing poison oak leaves was accentuated by the soft, orange light of a smoky sky.

From Saturday’s adventure run/hike over Boney Mountain to the Backbone Trail in from the Wendy Drive trailhead. 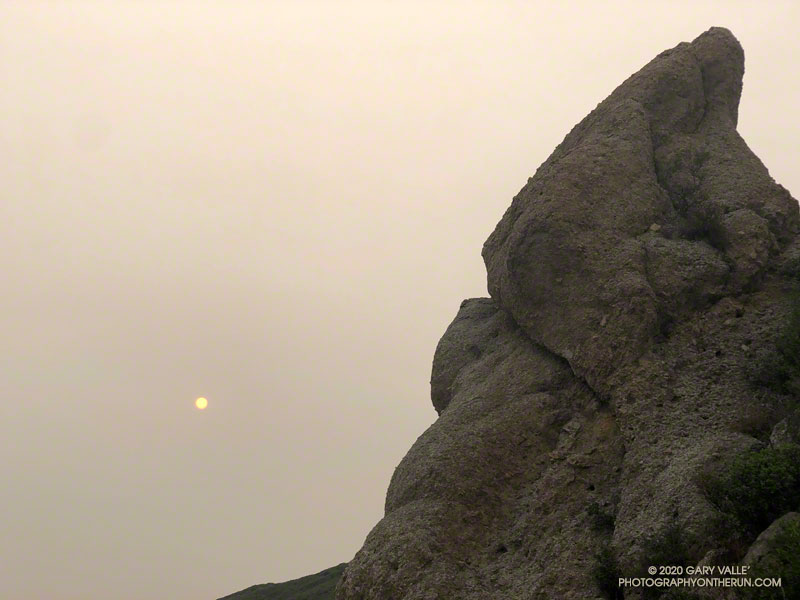