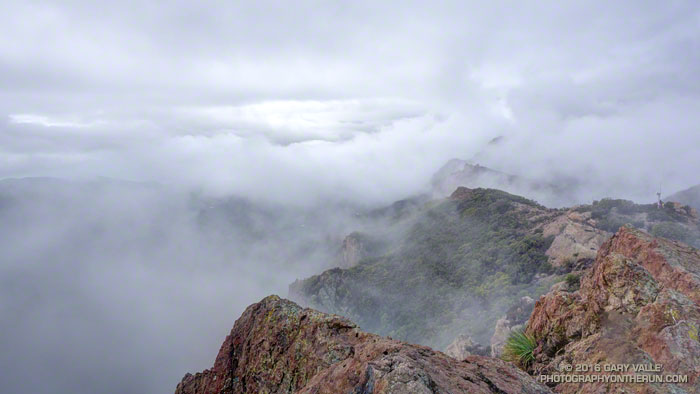 For the most part the upper layer of clouds had been above Boney Mountain. Thin wisps of cloud had clung to the ridges in a couple of places, but the ceiling looked like it was going to remain above the peak.

But then something unusual happened. A lower deck of clouds formed in the Conejo Valley, and then expanded upward, enveloping me as I worked up Boney’s Western Ridge. It wasn’t a whiteout, but in places the visibility was reduced to about twenty feet.

Fog changes the mood and character of a place, particularly a place where airy views and an expansive mindset are the norm. Thoughts turn inward and perceptions more narrowly focused. The big picture becomes entirely virtual.

Earlier in the week the area had been drenched by more than two inches of rain. It had been damp overnight and water filled the profusion of irregular pockets covering the volcanic rock. The rock was plastered with a patchwork of bright green moss and gray-green lichen. Saturated with water, the moss was slippery as ice. I climbed with extra care, especially on the steeper sections.

Where soil collected on tiered steps, obovate leaves of shooting-star and other annuals sprouted, presaging a show of the purple and yellow wildflowers. Chalk liveforever relished the moisture, its drought-scarred leaves rehydrating and recovering.

Higher on the ridge the intricate green foliage of red shanks, still recovering from the 2013 Springs Fire, was heavily-beaded with water. Brushing against it was like being sprayed with ice-cold water.

I remained immersed in cloud all the way up the Western Ridge, past Tri Peaks and over to Sandstone Peak, and didn’t climb above them until near the summit of Sandstone Peak.

A few photos from the climb and run are below. Click an image for more info and to display the image full-size. 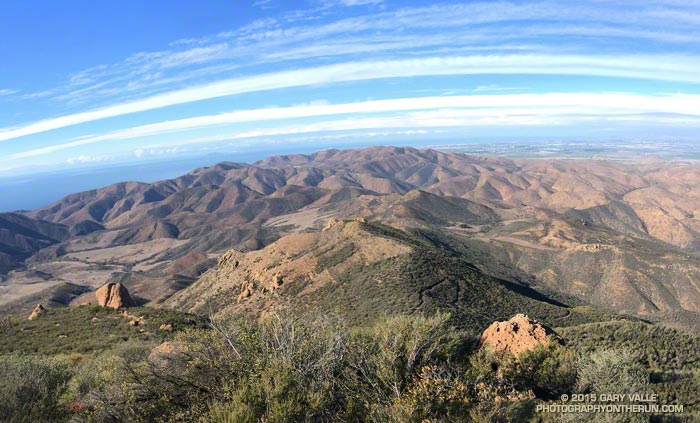 The last couple of days I’d been checking the weather models to try and get an idea of when the cold front might reach Pt. Mugu State Park. Projections ranged from around 10:00 AM to about 1:00 PM.

A group of us were doing an annual end of the year trail run and scramble over Boney Mountain to the Backbone Trail, and then returning by various routes to the Wendy Drive trailhead. Along the way there are great views of the Boney Mountain Wilderness, Channel Islands, Conejo Valley and Ventura Mountains, but you can’t see very far from inside of a cloud.

It turned out clouds would not be a problem. At least not the first half of the day. When I pulled into the parking area at Wendy Drive the front was little more than a white smudge on the western horizon. The sky was clear and it remained clear the entire time we worked up Boney’s Western Ridge. Everyone enjoyed scrambling up the gullies and rocks to the top of the mountain and then over to Tri Peaks.

We’d reached Tri Peaks about 40 minutes ago. From there I’d run over to Sandstone Peak, the highest peak in the Santa Monica Mountains. From this panoramic vantage point I could see the front was still well to the west, near Santa Barbara. This gave me some time. I was prepared for rain, but didn’t want to miss the wonderful scenery running down the Chamberlain Trail, over to Serrano Valley, and through Serrano Canyon.

Over the remainder of the run I watched as cirrus clouds ahead of the front gradually muted the sun, mid-level clouds began to develop over the peaks, and the wind became more gusty and fitful. Later in the run the clouds started to lower and thicken and the temperature dropped. Eventually it began to smell like rain.

As I crested the hill on Danielson Road I felt a cold drop of rain on my arm and then another on the back of a leg. Clouds covered the sky, and to the west showers draped the ridges and filled the canyons. The front and I were racing the last mile to the trailhead, and I knew who had won. 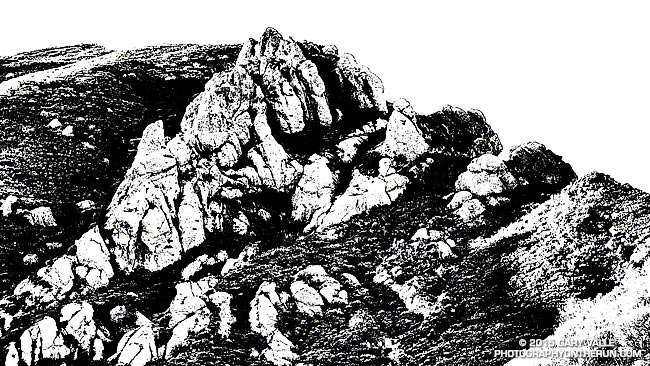 From today’s run, hike, scramble and climb of Boney Mountain’s Western Ridge. The rounded pinnacle at the  top of the formation is this one. 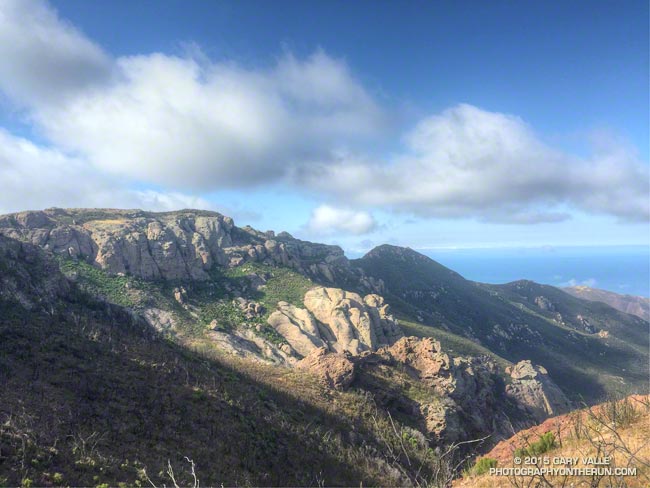 While running in the Marin Headlands last weekend it occurred to me that it had been at least a couple of months since I’d done a a run in Pt. Mugu State Park. In addition to following the recovery of the area since the May 2013 Springs Fire, I’ve been surveying the effects of the December 2014 flash floods in Sycamore Canyon and its tributaries and hadn’t yet looked to see what happened in Serrano Canyon.

Today’s run was a variation of option B. After climbing Boney Mountain to Tri Peaks, I ran over to Sandstone Peak using the Tri Peaks and Backbone Trails. Sycamore Canyon Fire Road, Two Foxes Trail and Upper Sycamore Trail were used to get back to Satwiwa and the Wendy Drive trailhead from Serrano Canyon.