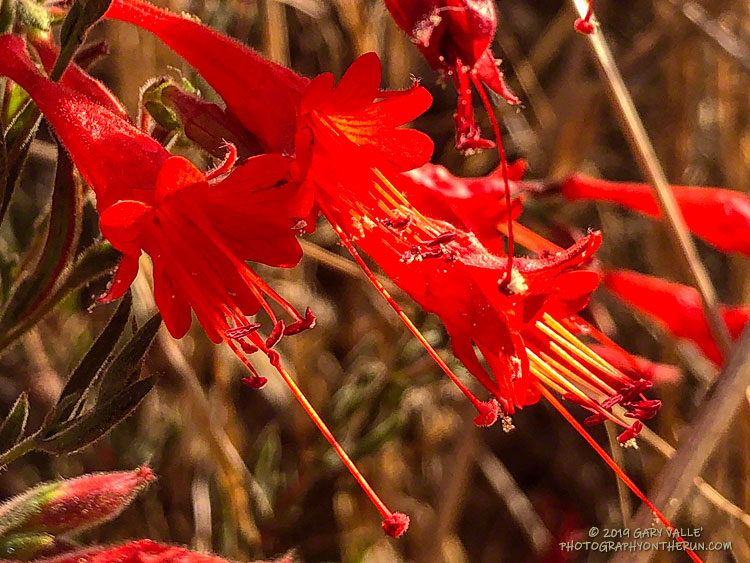 If the wildflower is red, the season is Fall, and you are in Southern California, the flower is probably California fuchsia. You might also find there is a hummingbird feeding on the “hummingbird trumpets,” or hovering nearby, watching over its flowers.

As a result of the wet 2018-19 rain season, and somewhat cooler than normal summer, California fuchsia is especially abundant this Fall, with some exceptional displays along local trails.

I’ve added California fuchsia, and a few other flowers that are blooming this Fall, to my Weekday Wildflowers slideshow. These are wildflowers photographed this year on weekday runs from the Victory Trailhead of Upper Las Virgenes Canyon Open Space Preserve.

Both were found along the Lasky Mesa Trail near the dry streambed of East Las Virgenes Creek. They likely escaped cultivation or were part of a seed mix scattered in the area.

The weather was Southern California perfect. Shorts and short-sleeves were the dress of the day. Winds were light, no thunderstorms were in the forecast and no large wildfires polluted the air. Although temps in the valleys were nearing 100 degrees, the weather on the summit of 11,499′ San Gorgonio Mountain was altitude-conditioned bliss.

I’d spent about 15 minutes enjoying the summit, then run back down the Summit Trail. Turning left onto the Sky High Trail, I continued a keyhole loop that had ascended the South Fork Trail, Dollar Lake, and San Bernardino Divide Trails. Altogether, the route was about 21 miles long and the approximate elevation gain/loss was 4700′.

From the start of the run, the effects of the wet 2018-19 Winter and big snowpack were everywhere. Wildflowers bloomed in profusion, seeps and small streams greened the landscape, and grasses and ferns grew thick beneath the trees. The roar of the streams at South Fork Meadows left little doubt as to what kind of Winter it had been.

On the way up the Dollar Lake Trail, I’d seen elongated patches of snow in the chutes along the crest. While there was no snow directly on the trail between Dollar Lake Saddle and the summit, there was more snow than usual on the north side of the peaks.

A little disappointed, I’d put my poles away and continued running down the trail. At around 11,100′ I rounded a corner and surprise, surprise — there was a much larger patch of snow on a southeast-facing section of trail. It was about 100 yards across and steep enough that a fall would be a bad idea. Fortunately, the snow conditions were perfect. A few hikers had recently traversed the snowfield, and I followed in their footsteps.

However, that wasn’t the last of the snow. At an elevation of about 10,200′, not far past the C-47 crash site, the trail crosses a long chute that extends nearly to the top of Gorgonio. The snow in that chute had melted just enough that a thin strip of trail was exposed.

Thinking that had to be the last of the snow, I continued the traverse to Mineshaft Saddle (9936′) and began the descent of the Dry Lake Trail. Once past a rocky section of the trail, I picked up the pace, energized by the increased oxygen at lower elevation. Enjoying the downhill, I descended into an area of converging chutes and gullies, when the path through the lodgepole forest abruptly ended.

The trail was obliterated. Large trees were ripped from the ground, broken, tossed, and piled up as if they were matchsticks. Underneath the debris were mounds of dense, icy snow — the remnants of an avalanche. This report on SoCalSnow.org includes photos of an avalanche in February 2019 on the north face of San Gorgonio and mentions previous avalanches.

That snow, at an elevation of about 9400′, had finally been the last on the trail. Because the compressed snow is effectively a big block of ice, it could be around for a while.

In the area of the avalanche, the Dry lake Trail enters a large area of rocky rubble that extends into the Big Draw. According to the Dibblee Geologic Map for San Gorgonio Mountain, this rubble is glacial till, produced by the largest of several pocket glaciers that existed on San Gorgonio Mountain, Shields Peak, and San Bernardino Peak.

Continuing down the trail to Dry Lake I saw where some of this season’s meltwater had gone — for the first time since 2011, Dry Lake was full in late July.

Last Saturday’s run was so enjoyable that yesterday I went back to Gorgonio and did it again. As might be expected during a Southern California Summer heatwave, the snow on the Sky High Trail, and elsewhere, is melting fast and won’t be around for long.

Here are a few photos taken along the way. The album includes photos from both the July 27 and August 3 runs. A couple of photos from a run on September 7 were also added. 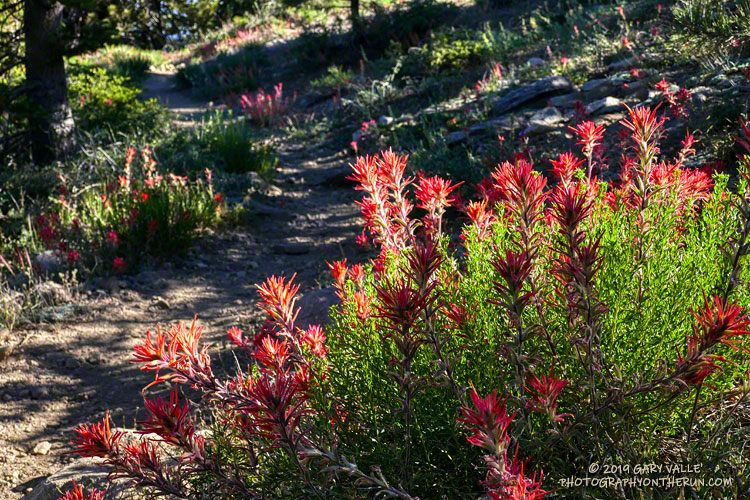 The out and back trail run from the Chula Vista parking area on Mt. Pinos to Mt. Abel (Cerro Noroeste) is a long-time favorite. It combines subalpine summits, beautiful pine and fir forests, and a unique flora with uncrowded trails that are fun to run and explore.

The basic out and back to Mt. Abel (Cerro Noroeste) with a stop on the way back at Sheep Camp for water is around 14 miles with an elevation gain/loss of about 3400′. The side trips to Sawmill Mountain and Grouse Mountain are short and add about 0.75 mile to the distance and around 250′ to the elevation gain.

As in other areas of Southern California, the wet 2018-19 Winter has resulted in an abundance of wildflowers in the Mt. Pinos region. Paintbrush, mariposa lily, larkspur, penstemon, lupine, phlox, iris, yarrow and many other plants are blooming in profusion. Limber pines in the area are full of cones and the spring at Sheep Camp is flowing well.

Floras and checklists for Mt. Pinos have been compiled by Tom Chester, CalFlora, Mount Pinos Ranger District, David L. Magney and others.

Here is a Juicebox album of a few photos taken on this trail run on Mt. Pinos.

Some related posts: Up, Down and Around on Mt. Pinos’ Tumamait and North Fork Trails, Thunderstorm, Pinos to Abel Plus 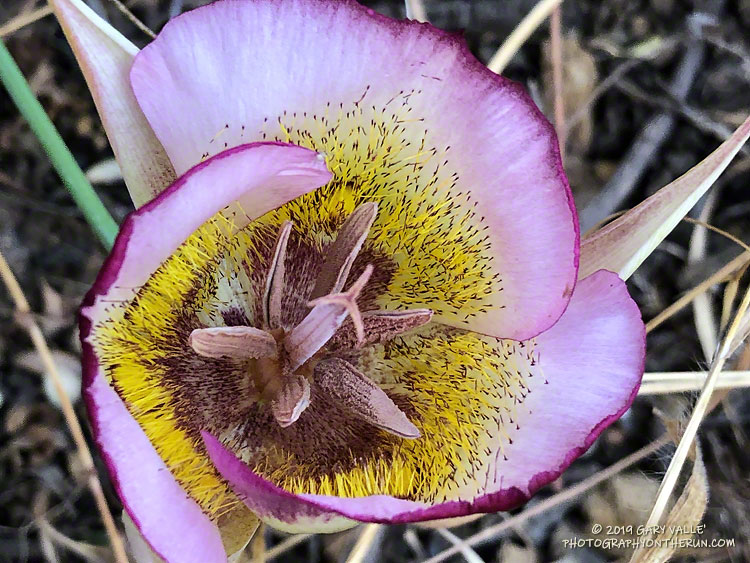 When I run to Trippet Ranch from the Top of Reseda, I like to take the fire roads out and single-track trails back. The trails I use to return to the Top of Reseda from Trippet are the Musch, Garapito, and Bent Arrow Trails.

I don’t think I’ve seen as many Plummer’s mariposa lilies (Calochortus plummerae) along the Garapito Trail as I did this last Saturday. Like many other plants this showy lily seems to have benefited from the wet 2018-19 rain season and generally cool Spring temperatures.

The Plummer’s mariposa lily has a CNPS Rare Plant Rank of 4.2, which means it has a limited distribution and is moderately threatened in California. It’s not necessarily rare within its range, but its range is limited to a small area of Southern California.

Among the other wildflowers along the trail were numerous large patches of Scarlet larkspur (Delphinium cardinale) and Farewell-to-spring (Clarkia bottae). 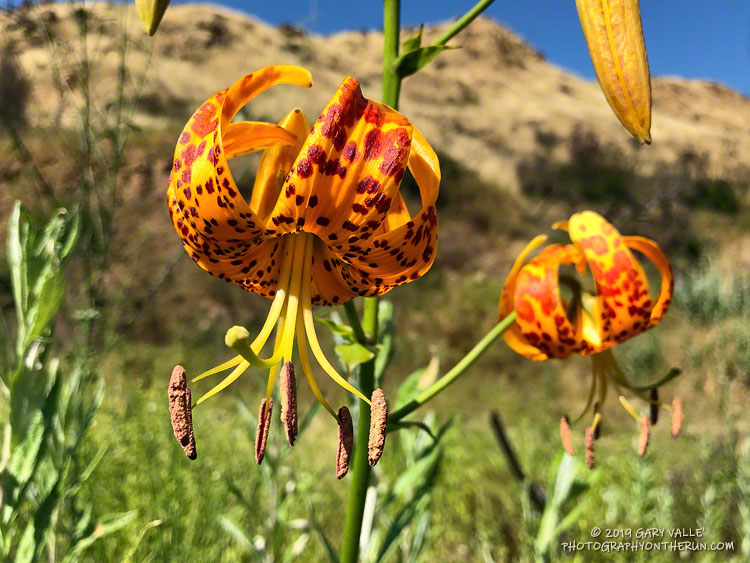 Images taken on trail runs, and other adventures, in the Open Space and Wilderness areas of California, and beyond. All content, including photography, is Copyright © 2006-2019 Gary Valle. All Rights Reserved.