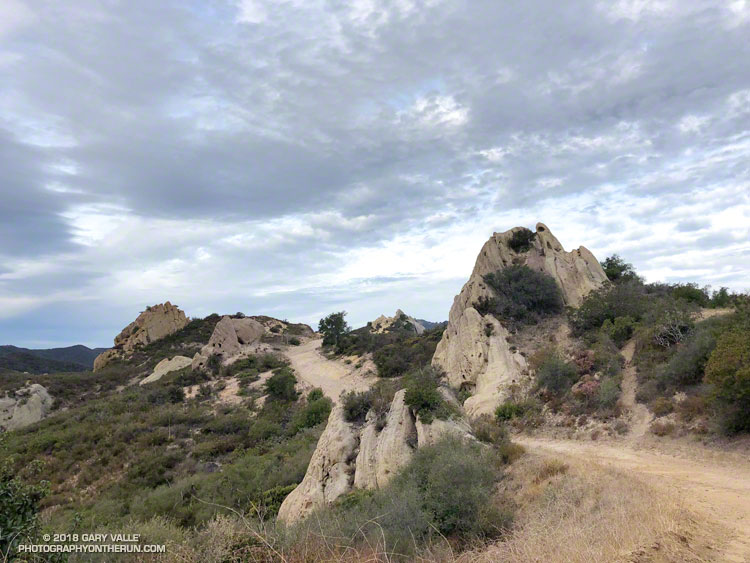 I looked at the mileage on my Garmin watch — 11.93 miles. I was at Kanan Dume Road and debating whether to make Kanan my turnaround point. My run had started at Malibu Canyon Rd. & Piuma Rd., where I’d picked up the Sean O’Brien Trail Runs course at around mile 2. After crossing Malibu Creek, the 100K, 50M, 50K and Marathon courses all follow the Backbone Trail westbound from Malibu Canyon.

The ground had been spotted with raindrops as I started the nearly 3 mile, 1500′ climb out of Malibu canyon. Subtropical moisture was streaming in from the southwest and there was a broad swath of clouds over Southern California. There were scattered showers, but most of the rain was evaporating before it reached the ground. The last time it had rained was more than a month ago, and the smell of rain was intoxicating.

Two weeks ago I’d done this climb as part of a “reverse” Bulldog loop. It hadn’t become any less steep. Most of the climb is on a fire road and some of it is runnable — just how runnable depends on your VO2max, determination and inclination. It was a relief to reach the top and start running downhill, even if another climb loomed just ahead.

Once to the top of this next climb, it is about a mile and a half to Corral Canyon. There are a couple of short ups and downs along the way and the rock formations become increasingly dramatic. Just east of Corral Canyon the Backbone Trail winds through a wonderland of rocks and pinnacles, climbing a steep sandstone ramp and passing through a rock gateway.

From Corral Canyon the Backbone Trail drops into Upper Solstice Canyon. Today, the 16 crossings of the small creek in the canyon were all dry. Someone had provided log seats under a sprawling oak at “heart” meadow. I had to stop for a moment just to enjoy its tranquility. On a run here in January several years ago, the area was covered in ladybugs.

The high point of the 50K course follows the climb out of Upper Solstice Canyon and is near the saddle at Newton Mtwy. Back in the day the Bulldog 50K used to climb up and over the shoulder of Castro Peak from the top of Bulldog; then descend to this saddle and continue to Corral Canyon on the Upper Solstice Canyon Trail. This 2004 Los Angeles times article describes why the road is now gated and private.

The day was a little warmer than expected and the shaded sections of trail in Newton Canyon were refreshingly cool. The dried out stalks of last year’s hummingbird sage were common along the trail and given the lack of rain, I was very surprised to find a plant that was blooming.

The Sean O’Brien Marathon turns around at Kanan Dume Road, which is what I should have done. That would have resulted in a pleasant 24 mile training run with a bit over 5000′ of gain. Instead I decided to continue west on the Backbone Trail and “just run down to the bridge” to see if there was any water in Zuma Creek. There wasn’t. The bridge also would have been a perfectly good turnaround point that would have netted a 26 mile run.

But it was one of those rare, long run kind of days where the mind and legs are in sync and the miles almost didn’t matter. I reasoned that the Sean O’Brien 50K turnaround was “only” another mile and a half away, so why not continue. That way I’d have an even better idea of what to expect on race day.

I did continue, and with the exception of running low on water, everything went well. At Latigo Canyon several runners had just returned to their cars and I was able to fill up my Camelbak(R). Thanks Lou! And thanks to the other runners at the trailhead for their offers of gels, beer and salt!

I’ve run that section of the Backbone Trail several times, but never as an out and back. I now understand why the times for the Sean O’ Brien 50K are a little longer than the typical 50K. For one thing the course is about 1.5 mile longer than a 50K. For another, it has a TON of elevation gain. Using the elevation profile from my fenix 3 and a 1/3 arc-sec DEM from the USGS, the hand-calculated elevation gain worked out to be around 6000′. Tack on another 500′ of gain to account for the Tapia Spur Trail and the total gain for the Sean O’Brien 50K works out to a stout 6500′, give or take. 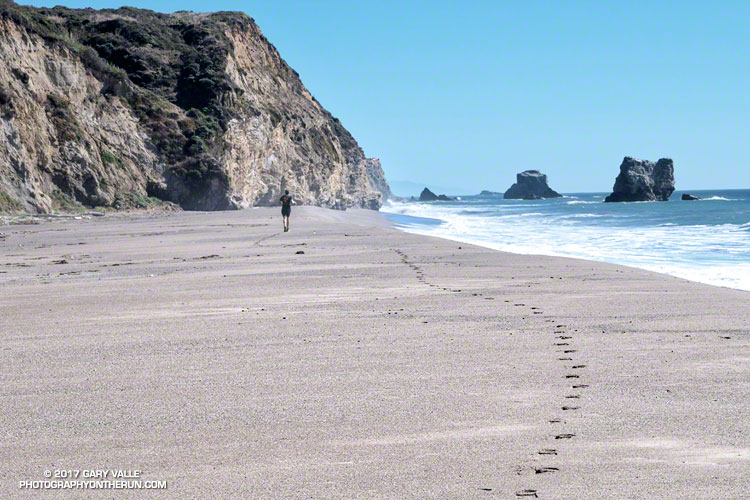 The sand was compact, the breeze cool, the surf up and the running oh so pleasant. Brett and I were running south along Kelham Beach, an idyllic stretch of sand between Point Resistance and Miller’s Point within Point Reyes National Seashore. If the tide was not too high we hoped to reach an area of dramatically folded strata along the 150′ tall sea cliffs.

Our adventure had started with a short run from the Bear Valley Visitor Center to a spot on the San Andreas Fault where a fence was reconstructed to illustrate how the Point Reyes Peninsula lurched 16 feet to the northwest during the 1906 San Francisco earthquake. Fences and roads in the Point Reyes area built across the fault trace were offset by as much as 20 feet during the earthquake.

The core of the Point Reyes Peninsula is a granite similar to a granite found in Southern California. Over many millions of years the chunk of crust was propelled northward along the San Andreas Fault by the movement of the Pacific Plate. The story is not a simple one, involving a combination of faults. At some point — perhaps near current day Point Lobos — the granite core was overlain by the sedimentary rocks we see on the peninsula today.

It seems likely that at times during its 10 million year journey northward from Monterey, the Point Reyes Peninsula may have been separated from the coast. With more than 80% of its perimeter currently bounded by water, it may once again become an island.

After visiting the fault zone we ran across the Point Reyes Peninsula to the coast using the Bear Valley, Mt. Wittenberg, Sky and Coast Trails. For the most part the trails were duff-covered, tree-lined, shaded and cool. For someone that runs mostly in Southern California this was practically nirvana. The previous Saturday I’d run a 50K race on a rocky, exposed course near Los Angeles in 90 degree temps and gusty Santa Ana winds. In the West San Fernando Valley the temperature this year has reached at least 95 °F every month from March through October. In July, August and September the highest temp each month was over 110 °F!

It was not 110 °F now. It was about 60 ocean-conditioned degrees. Brett and I had reached the first point where the beach narrowed. There was still room to run, but the beach narrowed even more ahead. We watched as a large wave broke and washed up to the rocks. It looked like the tide was going out, but we weren’t sure. Although the surf wasn’t huge, there was a consistent swell of maybe 6′-8′.

In between sets we took a look around the next corner and it looked sketchy. Debating, we watched as more waves washed up to the base of the cliffs. That part of the exploration would have to wait until another day with a lower tide!